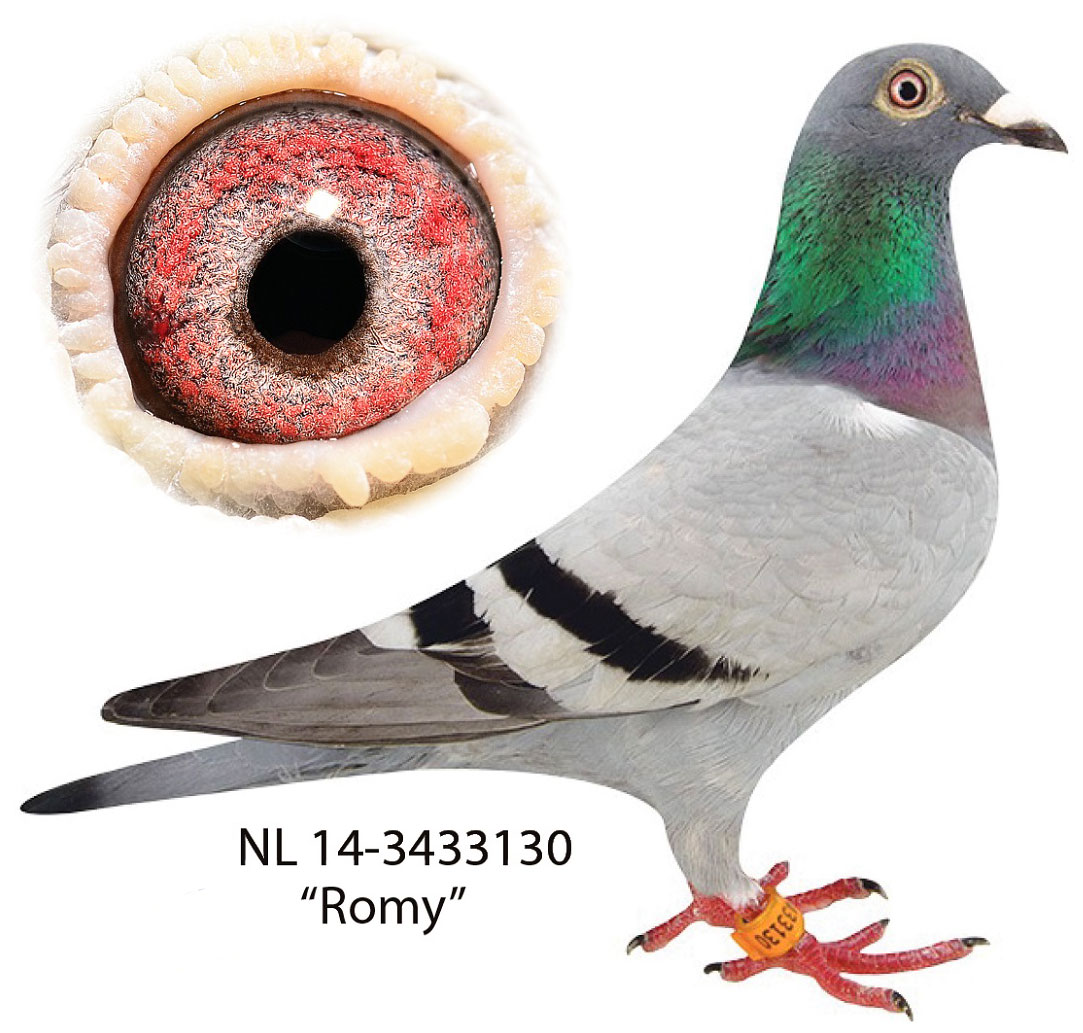 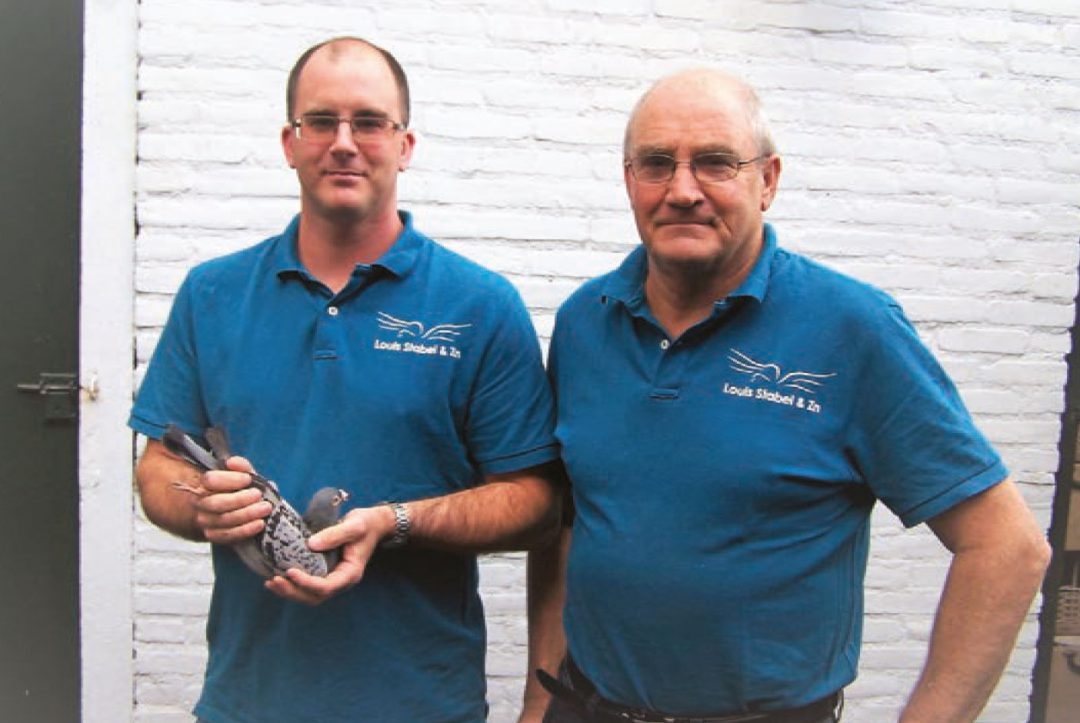 Father (Louis) and son (Eugene) Stabel race in combination and they are able to be constantly at the top in club and the combines, and also National they have very good results.

They take part in all the races organised by the semi-national organisation “Brabant 2000” and have had good results on all distances – but their main-focus is races from 100-650 km.

In 1990 Louis became National champion with youngsters and in 1992 Eugene won for the second time National Orleans. The years later they won a.o.: 3. National competition Youngsters WHZB, 7., 11., 19. and 22. National champion, 2. Overall ZNB, 2. Middledistance Acepigeon National for Europacup etc. etc.
And in “Brabant 2000” they won a lot of championships and as much as 17 TELETEXT pigeons (semi) National till 2007!

In 2020 they won for the 29. year in a row!!! the overall championship in their club with an average of 55 racing lofts with several big names in pigeonsport!

In the combine HVB (with 250 members) they are overall champion (13 times in 14 years) on the short and middle distance races – nobody ever did better.

And on the longdistance (500-650 km) they became 2. Provincial Champion nominated.

Fantastic results – year after year – allround results for so many years – that is SOMETHING SPECIAL!

The fanciers
Officially we see Louis Stabel and son Eugene, but in fact it is actually a trio because the “better half” – mother and wife Annet also contributes to their success. Louis is 69 years old and his son Eugene 41. Both were infected with the pigeon-bacillus on a young age and never came to recover from it.

The racing area
The Netherlands pigeon racing organization – N.P.O. – is divided into 11 districts, of which the middle and western part of the Noord-Brabant province forms district No. 2, known as “Brabant 2000”. As you can see from the map, it has four regions – 1, 2, 3 and 4. Its geographic situation is just north of the Belgian frontier. Their club in Goirle, the “Luchtstormers”, is located in the south-eastern part of region 4. 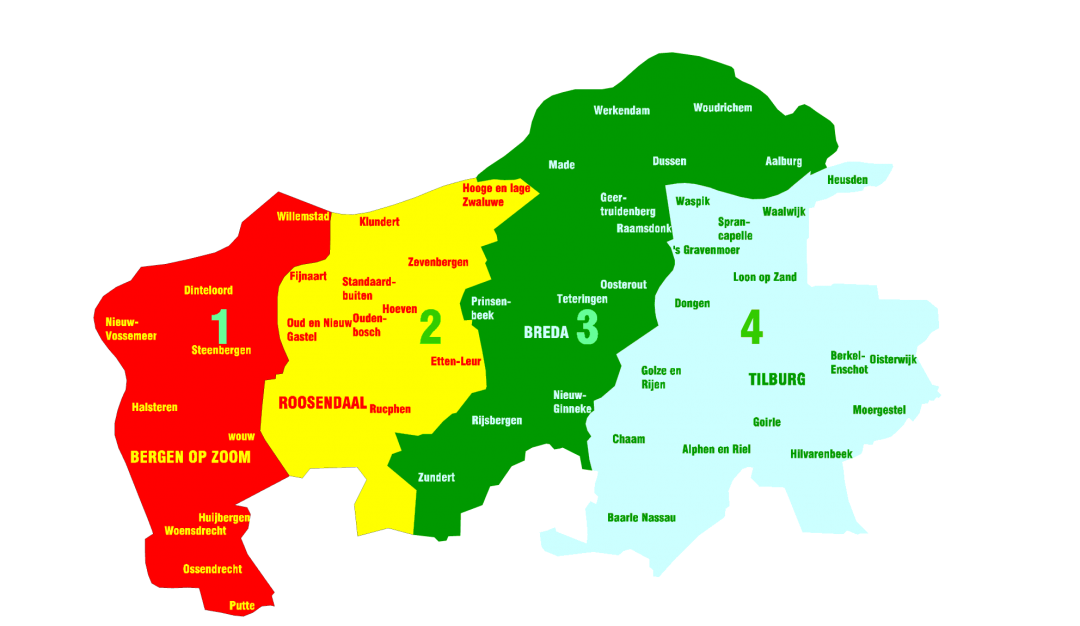 In the Goirle club they compete against 55 racers and many of them are strong lofts – such as wellknown lofts Wal Zoontjens and Reijnen-Bolton-de Hoogh.

The federations and combines they race as follows:

HVB – Hart van Brabant (175 members). A federation of 7 clubs in the eastern part of region 4. Here, they race short and middle distance with old birds and up to 320 km with young birds.

Brabant 2000 (1.275 members). The district comprising regions 1+2+3+4 as shown on the map where we fly long distance (semi-national) and overnight races.

National. This is a union of the provinces of Zeeland, Brabant and Limburg. Competition here is in overnight races, also 1 long distance race. And 1 young bird race from Orleans, but for these they only compete in “Brabant 2000”.

The building of the loft
In an historical perspective there have always been many great champions in Goirle and neighbouring villages. So Louis didn’t have to go far to obtain quality pigeons: in his own neighbourhood he got pigeons from Jan Verhoeven & son, Harry Verhoeven, Verhagen van Gorp and Christ vd Pol. In addition to these pigeons he purchased some birds from Ad Sas, who lived 5 miles from Goirle in Poppel, Belgium. Ad Sas had the right kind of racing birds in this loft from the world famous Louis van Loon, Poppel. Louis Stabel bought 28 youngsters from Ad Sas and one of them became a superbreeder. Descendants of this hen have won 5 National-races.

With pigeons from the above fanciers Louis and Eugene have been building a strong breeding fundament. Later on the they crossed their own base with pigeons from many local fanciers, so it is impossible to mention them al. Every year they buy some pigeons, but never named pigeons only from good racers and than from their best racers/lines. Every purchased pigeon will be tested in the races first. When they prove to be good racers they are crossed with their own pigeons. Occasionally they transfer new pigeons direct to the breeding loft.

The colony
Louis and Eugene are real programme-racers, and they take part in every program race from 100-1.000 km. In their area that means 14 short/middle distance races, 5 long distance races, 5 overnight races, 10 youngster races, 6 late tour races.
To be able to take part in all races they have 20 couple of breeders, 35 widowhood cocks and their hens, 80-85 widowhood hens with 32 cocks and a few couples for the overnight. They don’t race with the hens from the widowers in the start of the season, they only fly 6 autumn races. Also with the cocks from the widowhood hens they don’t race. They breed 200 -225 youngsters. For each discipline there is a separate loft. 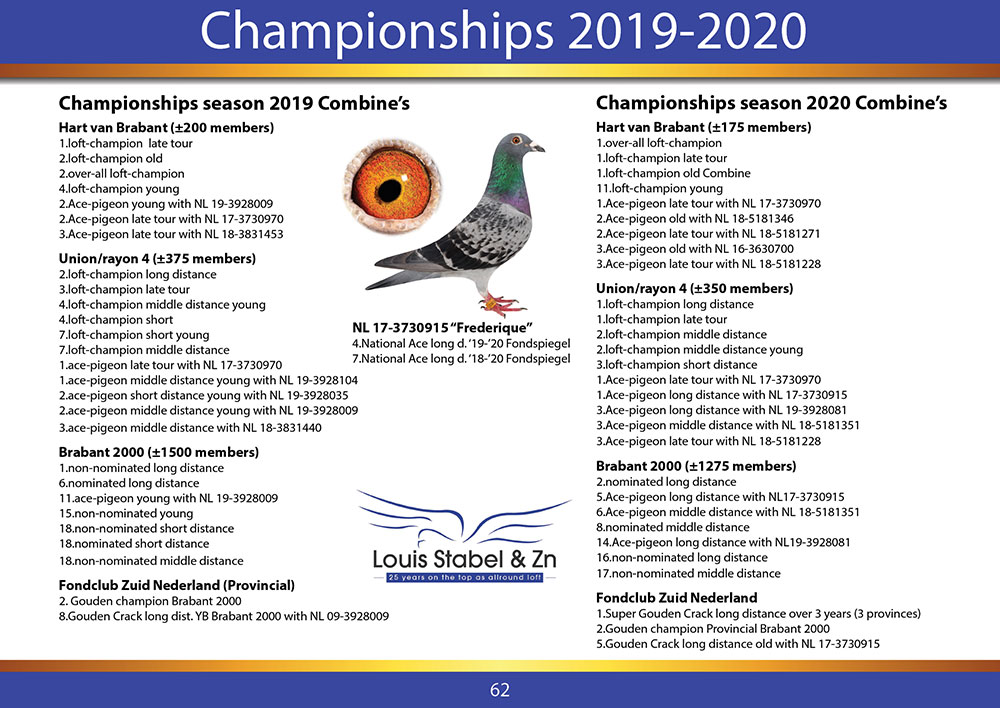 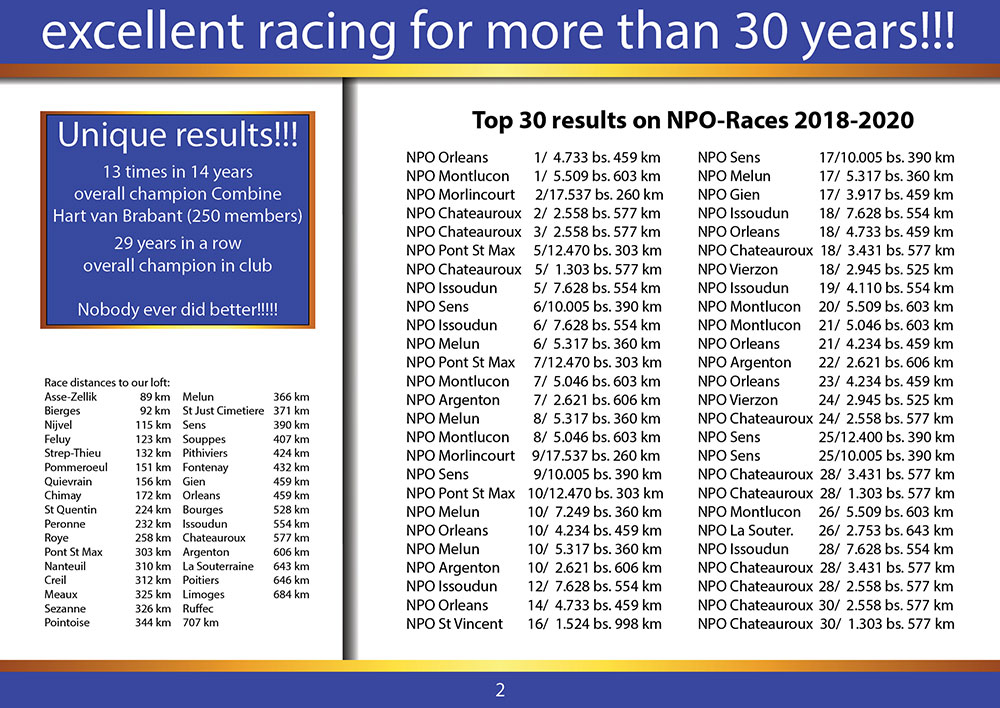 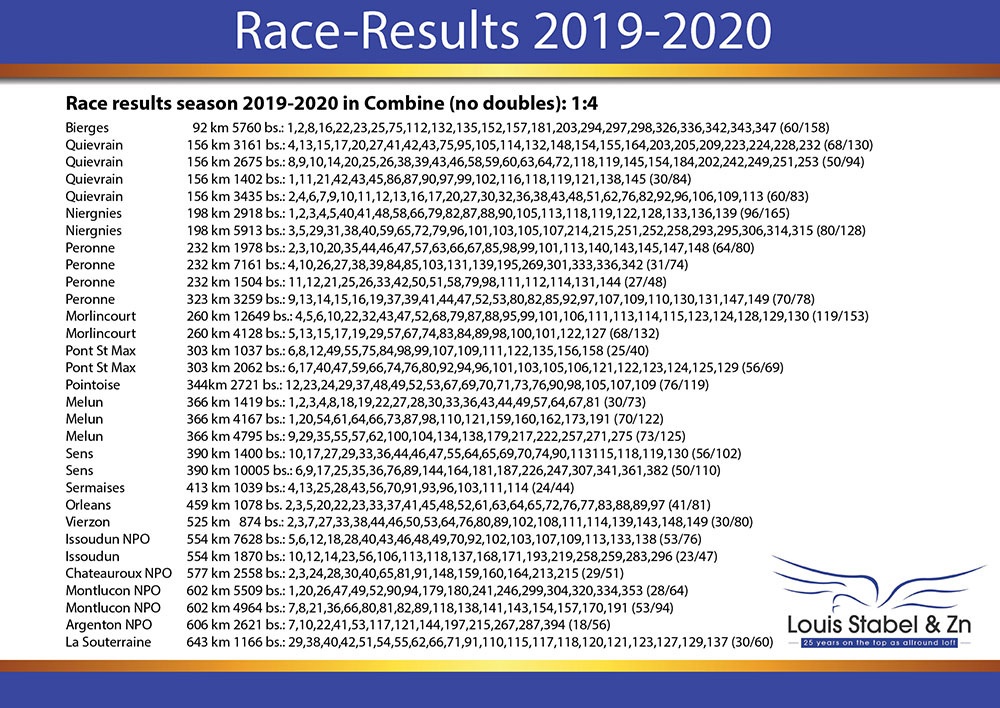 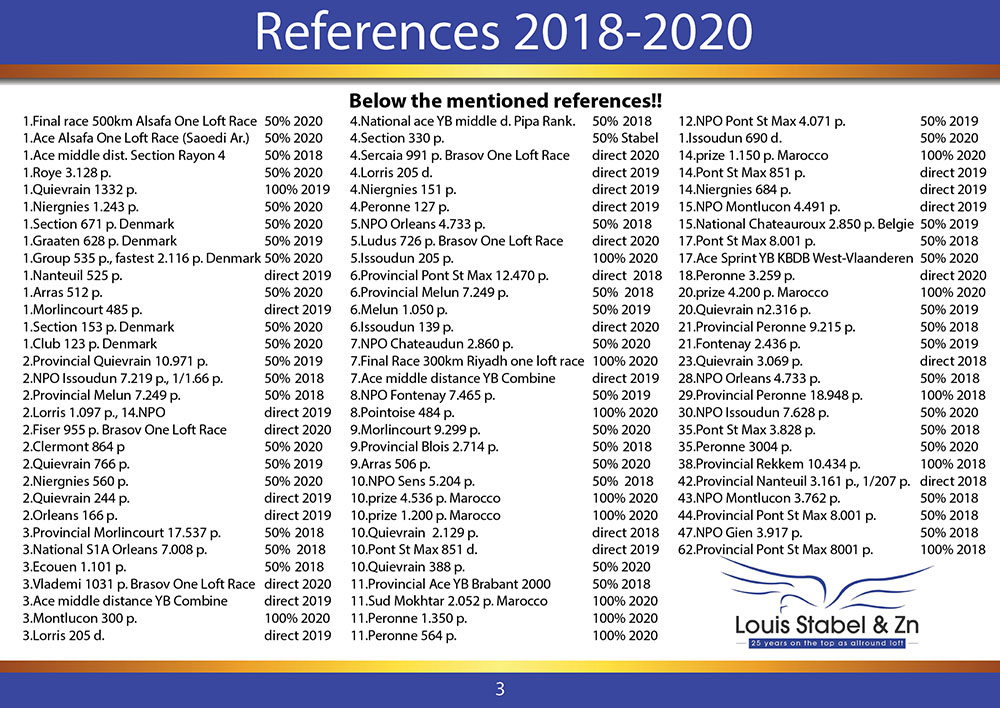