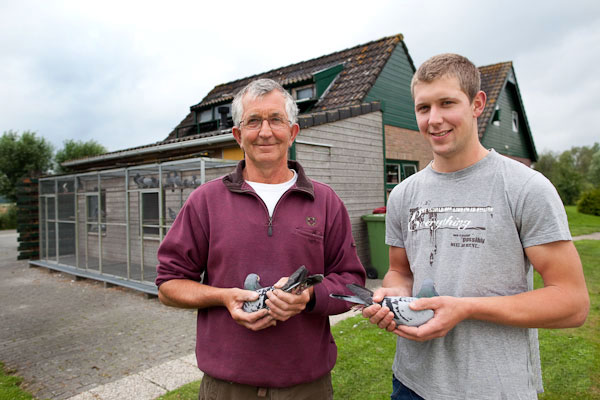 Hatty and Adriaan Roest are a father and son partnership. Hatty is 69 years old and Adriaan is 30 years.
Hatty has had pigeons as long as he can remember – his grandfather was also a pigeonfancier.

Adriaan came in the partnership around the year 2000.

The family lives in a small village called Tijnje, situated in the north of Holland.
They race in the program in the federation from 100 km up till 600 km.

The foundation base on the loft is the pigeons from the famous Gebr. Janssen – they purchased several pigeons there in the 80ties and 90ties. After that they also purchased pigeons from the legend Jos De Klak (who only had pigeons from the Janssen brothers).
Later on they added pigeons from Gerard and Bas Verkerk – youngsters from their Olympic pigeons – and in 2010 pigeons from Will and Falco Ebben, Leo Heremans and a few others.
They always cross the new arrivals unto their best birds and race the offspring.

Today, the breedingloft contains a mix of formal best racers, almost all raced on our loft and some directs for crossing.