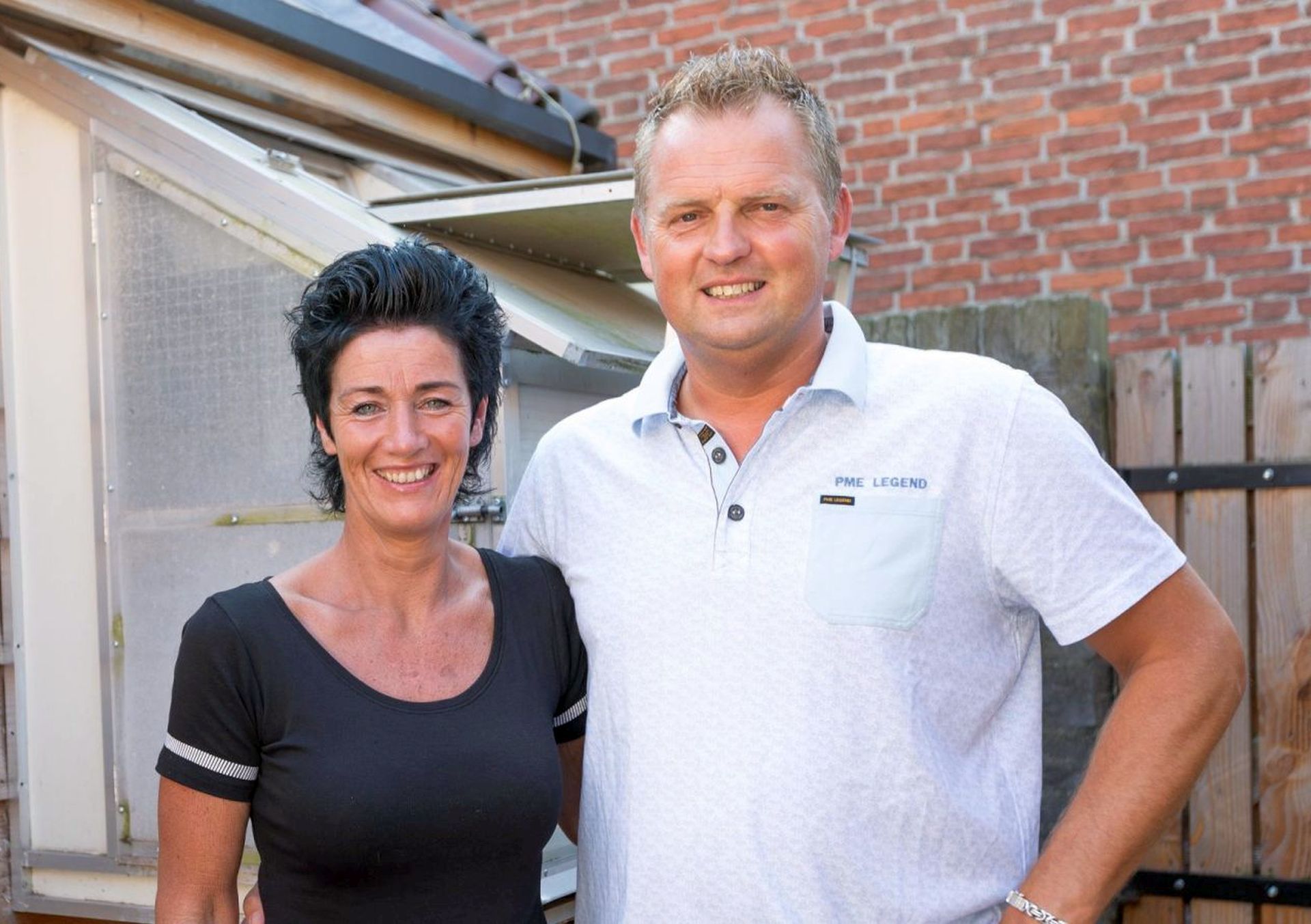 Liberation.
After the liberation of an international race, the question for Dutch participants and other interested fanciers is always how fast the fastest pigeons will go. We look at the wind on the flight path and any cloud and rain zones. Is the wind favorable for the front flight or for the overflight? Will the first pigeons arrive in Zeeland or will they be caught in South Limburg? We look forward to the first reports from France. What speed do they make? Does the speed increase as the distance increases? And can Belgium surpass France with higher speeds so that the Netherlands can also surpass that? And at Agen 2022, the chances of the Dutch pigeons in the international field seemed to be quite favorable. First the pigeons had to deal with a mild easterly wind and after about 200 km the wind started to blow from a southerly direction. And the strength of that wind seemed to increase more to the north. In the middle distance races, the top pigeons even managed to reach speeds of more than 1600 mpm along the coast. The first report came in France from the most northern part, followed by Belgian pigeons from West Flanders. The flight line to the coast turned out to be the most favorable. The first French report later turned out to be the second fastest pigeon of the release and in Belgium the two fastest pigeons reached 1353 and 1350 mpm in Klerken and Wevelgem. The first pigeon in the Netherlands was clocked in Westkapelle by the Comb. Verhagen-Buyl at 5.17 pm at 868 km. Their yearling reached 1341 mpm and that turned out to be the fastest Dutch Agen racer. 45 minutes later Gero and Evelien Dijk could welcome their first Agenracer in Alblasserdam and that was also a yearling. At 927 km it reached 1337 mpm. After 6.04 pm the couple clocked their second pigeon at 6.09 pm and that was now an old one. At 1327 mpm, this hen became the 3rd fastest of all Dutch Agen racers and she won the 1st national against 6162 old birds. And Gero and Evelien Dijk could say: “We won the 1st national with our second pigeon and with our first pigeon we won the 2nd national….” 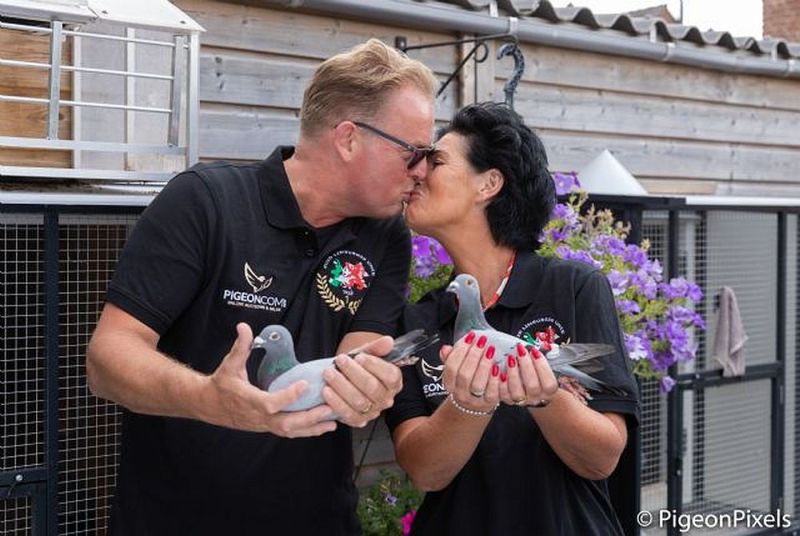 Fairy tale.
Five years ago, Gero and Evelien Dijk already won national Agen old birds with their THEO. Then they only had one old pigeon. THEO is named after Gero’s father, who was also a passionated fancier himself and at the time of the Agen victory in 2017 he was already seriously ill and later that year he died. THEO is from 2014 and was bred from a cock from Kees Bosua (Dordrecht) and a hen from Arie Dijkstra (Oudwoude). A clapper of a strong day fund type. And then THEO became the father of the yearling hen who now wins the 2nd national Agen yearlings. Her mother is LIZ NL19-1658903 who won the 1. National Agen old! You can come up with something like this in a fairy tale, but in Alblasserdam it has clearly become reality! LIZ wins the 1st national Agen old 2022, her daughter CHARLOTTE won the 2nd national Agen yearlings 2022 and the father of CHARLOTTE THEO won the 1st international Agen in 2017.
Gero and Evelien Dijk have never basketed such a large team as they do now on Agen. When basketing in Hendrik Ido Ambacht, Piet van de Merwe from Dordrecht also noticed that they had so many yearlings with them. But all cards have been put on the ZLU races and they predicted good weather for last weekend so the yearlings had to believe it. The season started in Alblasserdam with 25 couples. All pigeons from this Agen were basketed on eggs of about 8 to 12 days and that was their first nest of this year. Gero kept the couples together for as long as possible until the hens started to lay eggs. About 6 weeks ago they were separated and flown in as well. With a view to the first long distance race, they were coupled to be able to basket them on eggs. Last week the couple basketed 7 pigeons from Bordeaux (instead of Pau) and they won two great prizes nationally, the prizes 37 and 183 against 4891 pigeons. However, a pigeon remained behind that was still early from Narbonne last year with the 136th national and that was their second pigeon at the time. A smaller team is now ready for St. Vincent (ZLU).

New loft.
In 2017, a new loft of 8 meters long was built in the yard in Alblasserdam after the international victory from Agen. Evelien wanted a loft with a corridor in front of the accommodation and that was built. The loft was built by Eef van Aalten from Gelders Huissen, who is also an ardent fancier and races all races. Last year Eef was very early with a pigeon directly from Gero and the Comb. de Ruiter from Alblasserdam obtained a couple of youngsters and one of them flew an 11th NPO in the one day long distance in 2021 (as a yearling) and this year it was also a hit with 9th Issoudun against 9293 pigeons. Gertjan and his daughter Elena de Ruiter have only been active in the pigeon sport for a short time and therefore have a real top pigeon under their roof! Gero and Evelien have three sections for the old pigeons and one for the youngsters, and the barn houses breeders, most of which, including ‘Theo’, are housed elsewhere. Brother Michael also starts with the youngsters at his own address and he stopped after father Theo passed away and the pigeons disappeared from the parental property. 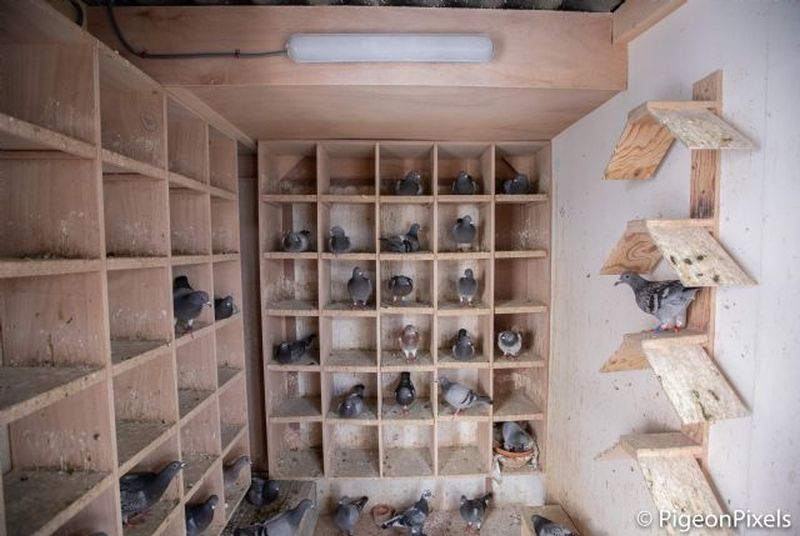 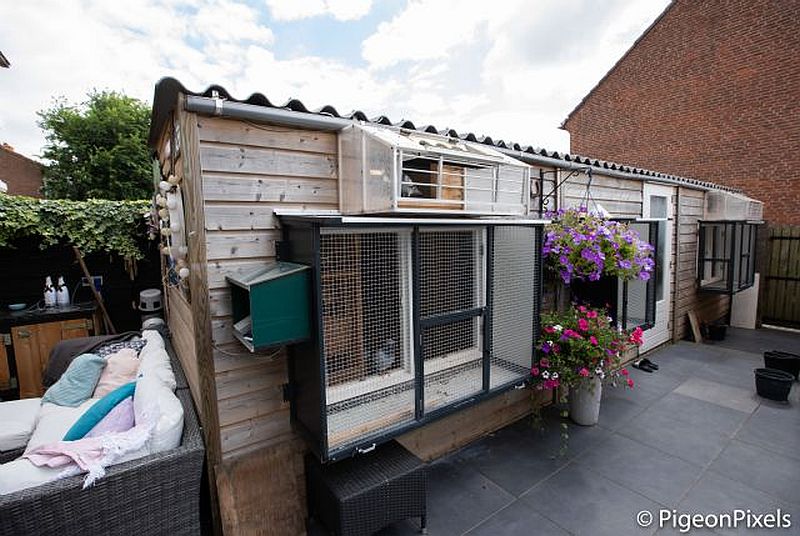 LIZ.
According to Gero, the winner LIZ is a perfect picture of a hen and that was the reason for him to couple her to THEO in the breeding loft in 2021. She then went back to the racing loft and that she came home well in previous years is proven by the prizes in the one day long distance with the 1st Issoudun against 552 pigeons, 33rd Blois against 11,576 pigeons and the 91st Chateauroux against 4973 pigeons. Her father is HET VERHEYTJE from father and sons Verhey from Hardinxveld-Giessendam, who was also a topper in the one day long distance. He comes from pigeons from Braad-de Joode (Woudrichem) and Martin van Zon (Krimpen ad Lek). The mother of LIZ was a year-old hen in 2019 that came from Peter Crans from Den Helder and in pedigree we see best day fund sorts from A. Dijkstra, Braad-de Joode and Rens vd Zijde (Den Helder). And just like with THEO, we don’t see specific varieties for the extreme long distance with LIZ, but more for the one day long distance. Now morning releases are also extended one day long distance races and on this Agen LIZ hung in the air for more than 11.5 hours to fly 928 km and she flew almost 80 km per hour. 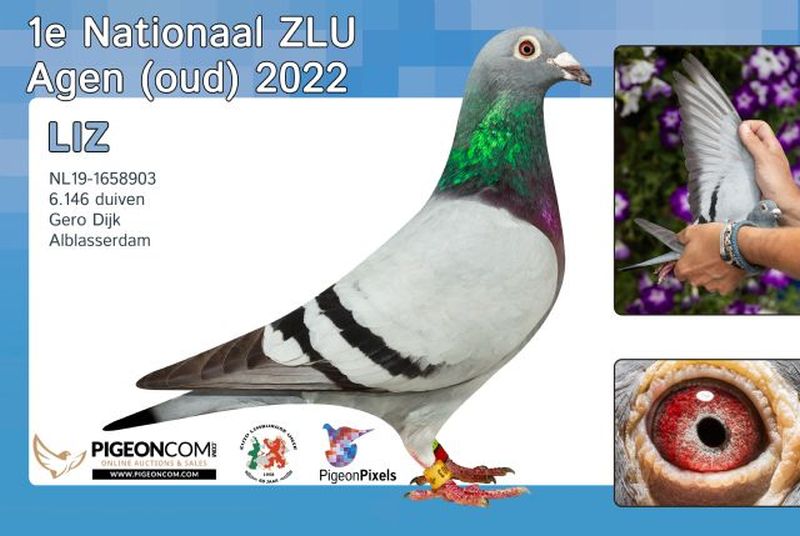 Long distance.
Recently Gero and Evelien started aiming for the extreme long distance and they have added new pigeons, so the current racing team consists of almost three quarters of that kind for extreme long distance. To obtain this kind of pigeons they approached Louis Vollebregt in Wassenaar, Wim Muller (Goes), Leon Roks (Standdaarbuiten) and Fam. Rans in Wijgmaal, Belgium. And that crossing has shown itself very well on this Agen with so many yearlings that managed to reach their home base very well in time. No fancier in the Netherlands managed to do this with a large team of yearlings! The 10th yearling has already arrived at price 160 on the notification list! 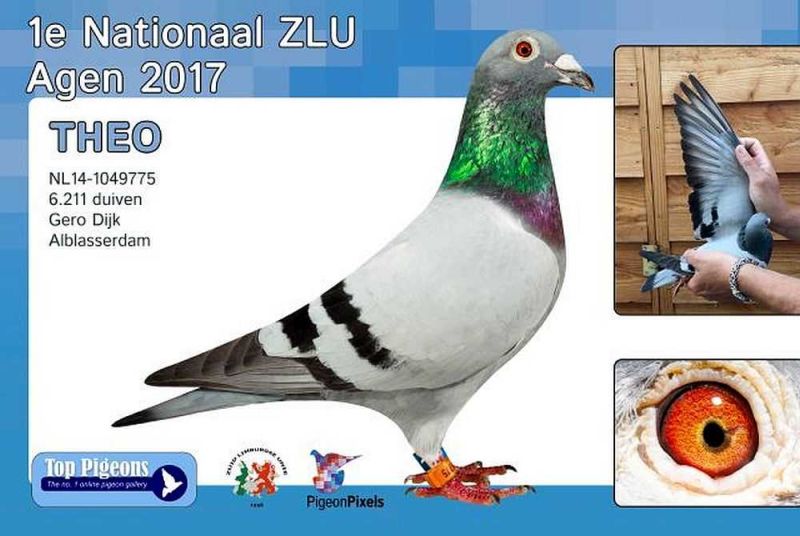 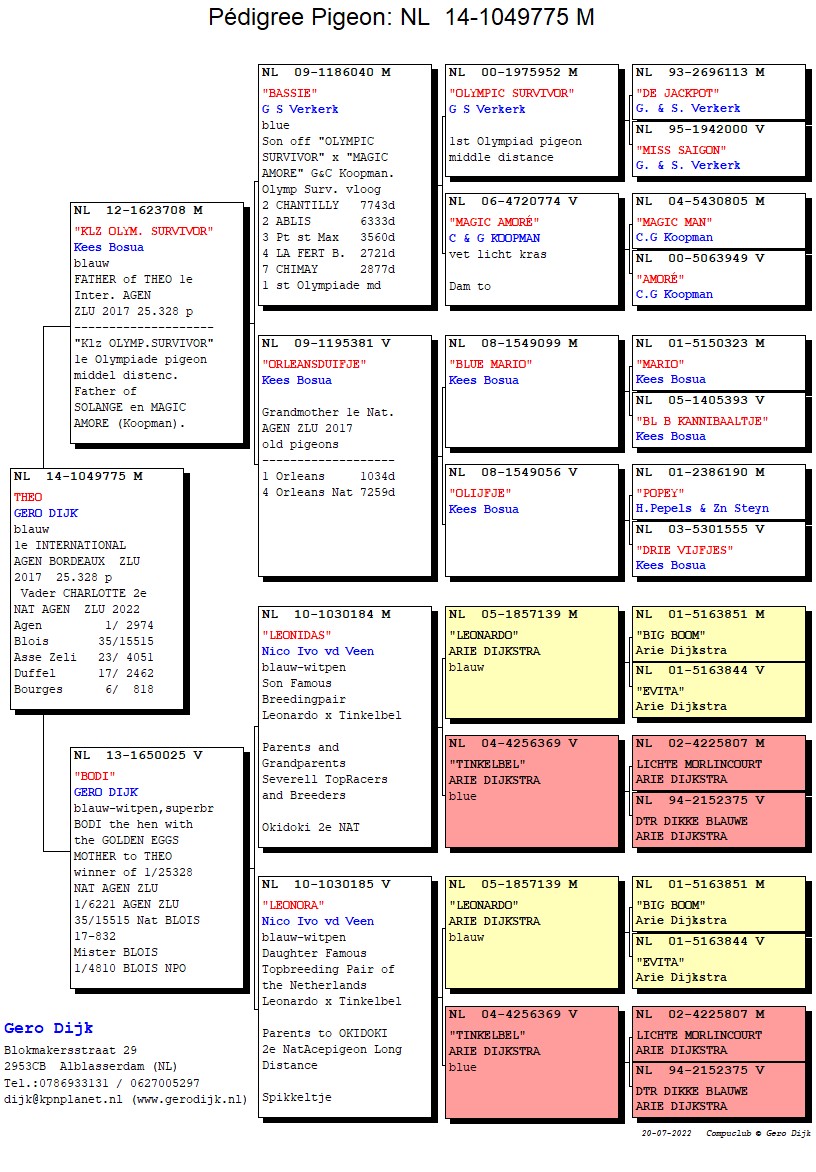 Evelien.
Very early in the morning Gero Dijk leaves home every (working) day to his work. Gero has his own company under the name ‘Gietvloeren BY Gero’ and he works as a self-employed person and applies all kinds of finishing floors in homes, institutions and companies. On his own website I saw the beautiful name ‘plastic applicator’ to indicate his work as an applicator of plastic, coating and trowel floors. Because of his work, wife Evelien’s hand is indispensable in the pigeon sport. She lets the racing pigeons out in the morning and when they are on the nest, this is compulsory training for all pigeons. If they are separated then the sexes understandably train separately. Evelien also lets the youngsters out. When he returns home from work, Gero lets the pigeons train for a second time. Feeding is made as easy as possible and Evelien provides the food from a large bowl and the pigeons get a full bowl and when everything is gone, it is replenished. In the medical field, we react quickly, as the Flemings say. The pigeons are checked regularly during the racing season. And that certainly happens on the Wednesday before basketing and if the pigeons are not good and top then there is no basketing. This checking is done by veterinarians Stefan Göbel and Fernand Mariën. Gero could read that certain pigeons were doing well once before from the arrivals of a training flight held by ‘Hank’. Mother and daughter were also early on. But could Gero have imagined that they would later fly the 1st and 2nd national? A fancier can dream of it in advance, but usually those pigeon sport dreams do not come true. But at Agen 2022 in Alblasserdam with Gero and Evelien Dijk. Superb right! A pigeon day to remember and which will always remain a sweet memory.