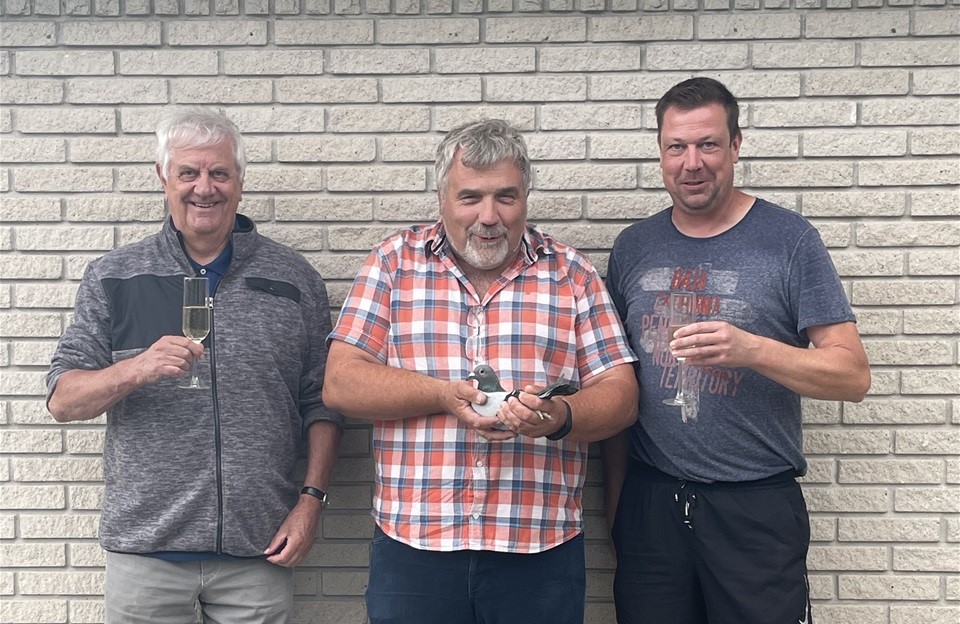 A dream came through!

After a time away from the racing pigeons; Preben go to return to the sport. And he had some very clear goals – he wanted to find a partner who could help him fulfill his dream of flying in the top of the longdistance and marathon flights in Denmark.
A real natural choice fell on Team Eriksson – Bo and Mogens – who had been racing in top for many years. First on the middledistance, later also real top results on the long distance. Bo and Mogens had several championships and several regional winners, so it was natural to setup the dream already for 2021.
Team Eriksson raced on the nest and Preben had the same thoughts – that playing on the nest is the best system for longdistance races.

Today the team is Bo, Mogens and Preben and they each have a responsibility. Bo pulls the big load in taking care of the race- and breeding loft daily. Mogens is helpful with the youngsters every day in the summertime.  Preben is webmaster for the team and help with the pigeons when his work allows him to.

The loft is situated in the middle of the island Fyn (Funen) so if the pigeons must fly the straight-line home, they must cross the water for about 60 km. It can be difficult to find the pigeons for this task, but it is necessary if they must race in top!

The dream was to peak on the long-distance races in 2021 – and the season turned out to be just what they dreamed about!

Bo and Preben have always believed at the pigeons from Comb. Verweij-De Haan and the first proof happened when the team became provincial winner from Hannover with a one-year-old male after THYPHOON and BO’S DARLING. Of course, the expectations then got higher and the culmination were three very good results.
From Hof they became National winner with ROBIN
From Giesen they became 2. Regional with a one-year-old female
And at last from Antwerp they were back in top and became Regional winner with CATWOMAN I – a halfsister to ROBIN. 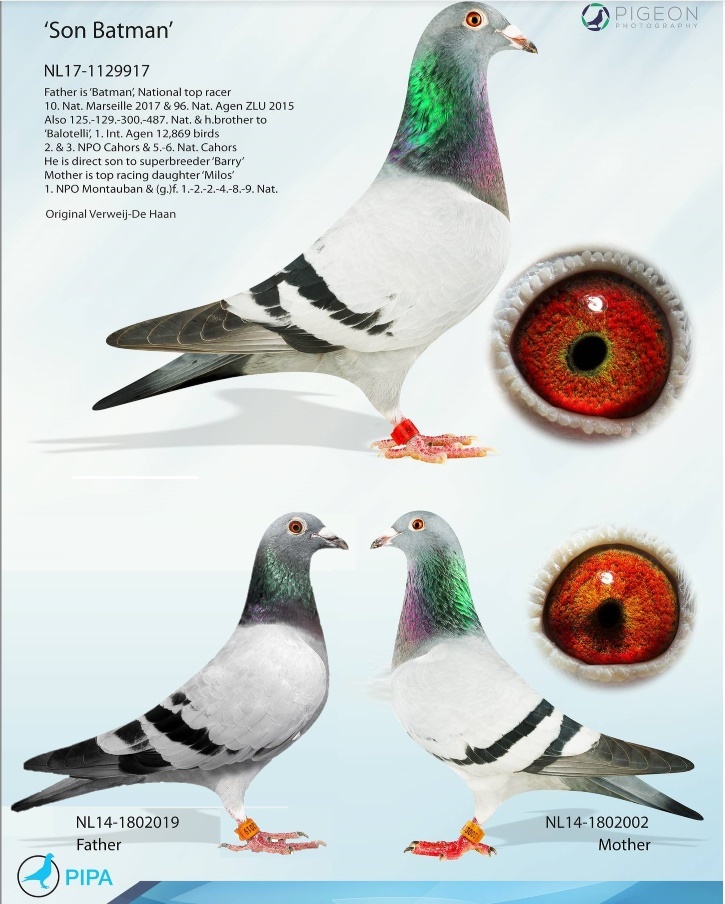 Direct son of BATMAN 10. National Marseille!
BATMAN is a son of the old star BARRY from Gebr. Jacobs – he raced very well with i.e. 28. National St. Vincent. And he is i.e. father to 1. International Agen 2015
SON OF BATMAN is also grandson of the superbreeder MILOS – a super racing pigeon but an even better breeding pigeon.
On the mother side we find MG780 as grandmother – the famous OLYMPIC MISS GIJSJE origins from Arjan Been.
SON OF BATMAN is in 2021 father to 4 winners with 3 different hens! 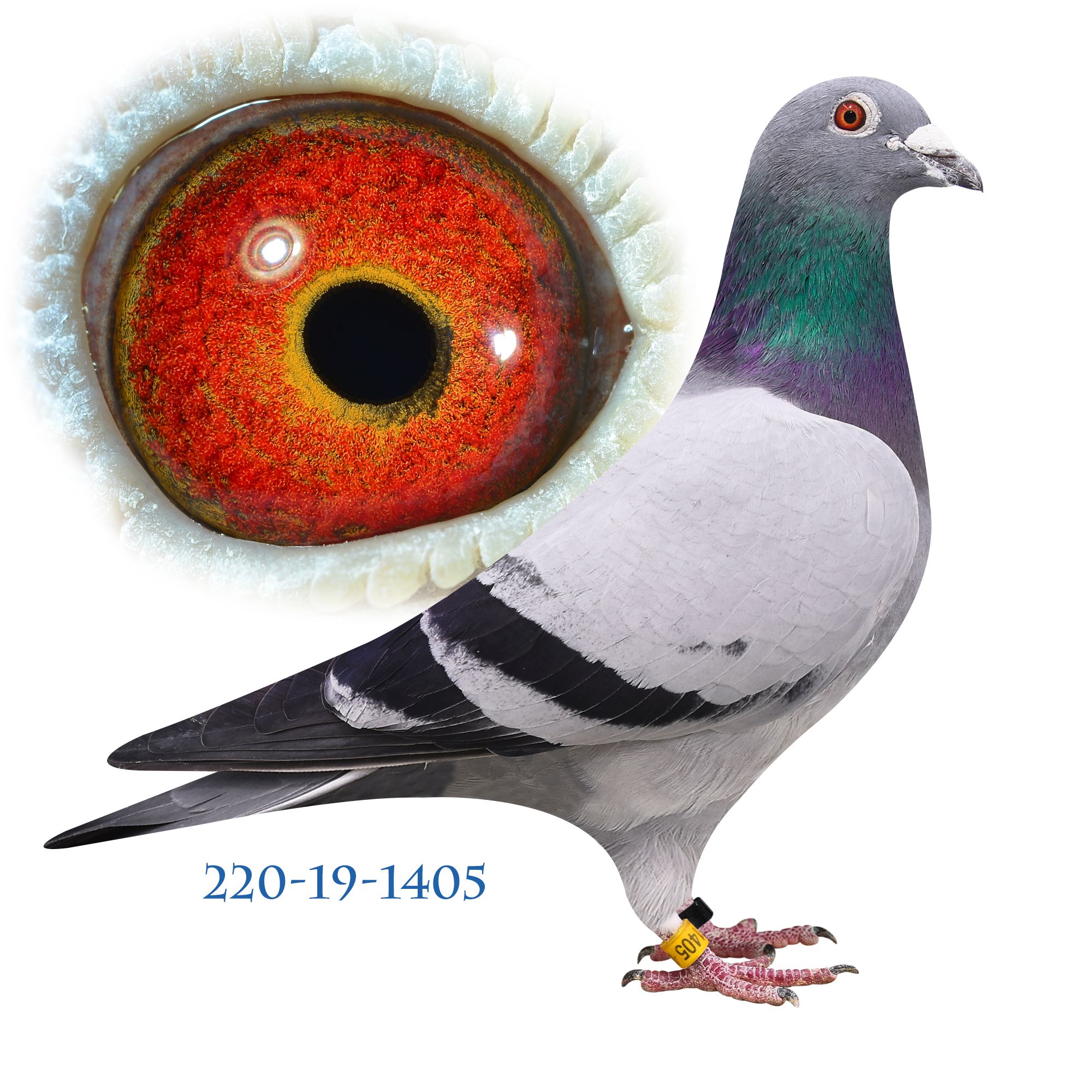 ROBIN:
1. National Acepigeon Longdistance in Denmark 2021 – and 1. National winner from Hof, 2. Region Würzburg and 3. Region Giesen.
He comes from LADY BLUE – again from MILOS – plus JONES and RED ROSE as grandparents. 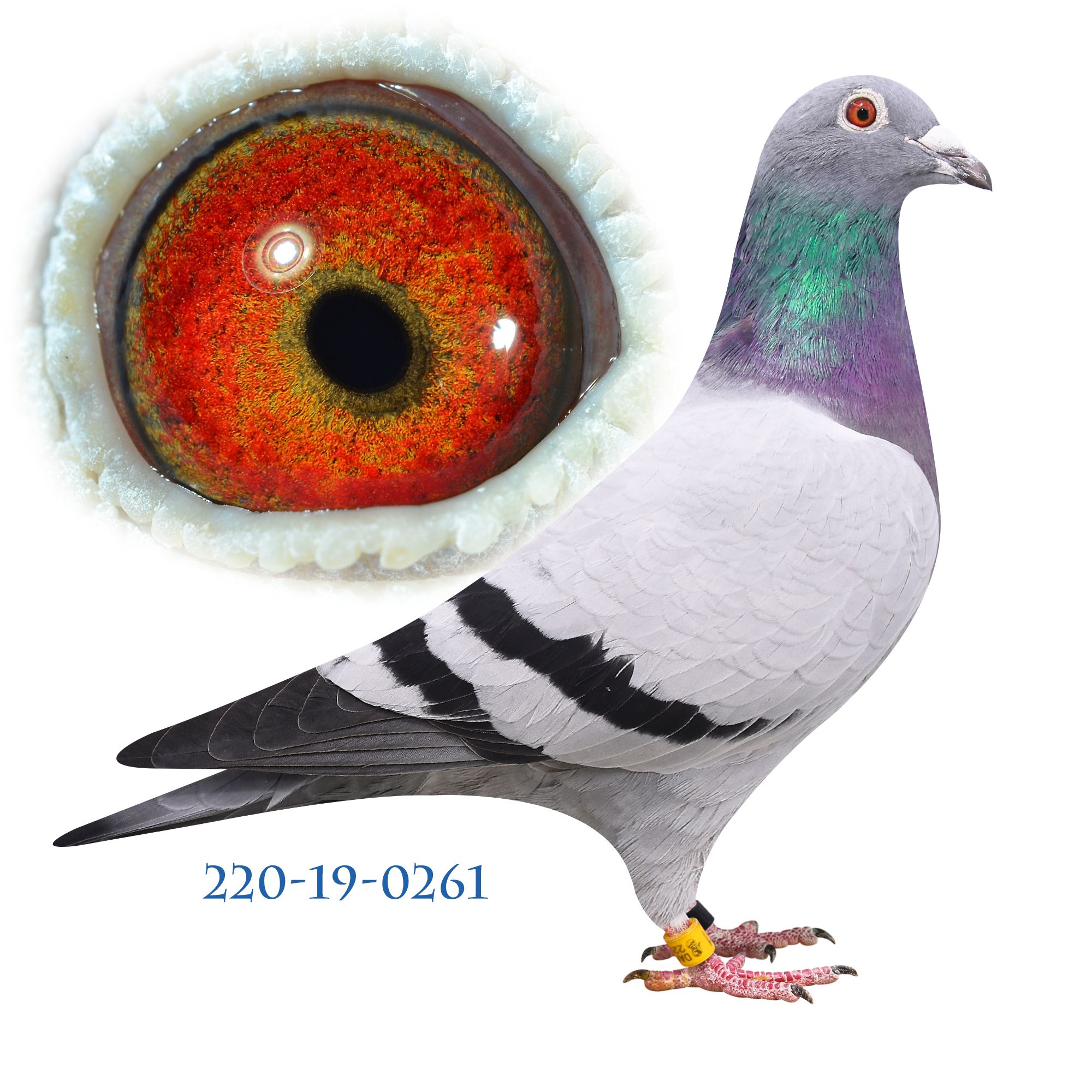 CATWOMAN I:
1. Region Antwerp as yearling!
She was born in december 2019 therefore with old ring. She raced from Dresden as youngster.
The mother is PO’S BARCAGIRL – direct from PRINS BARCELONA 1. National Barcelona and 4. International against more than 17.000 pigeons.

LEMME:
1. Region Münster for L&M Sorensen in Section 54 – and 2. Acepigeon Longdistance as yearling.
Fullbrother of CATWOMAN I. 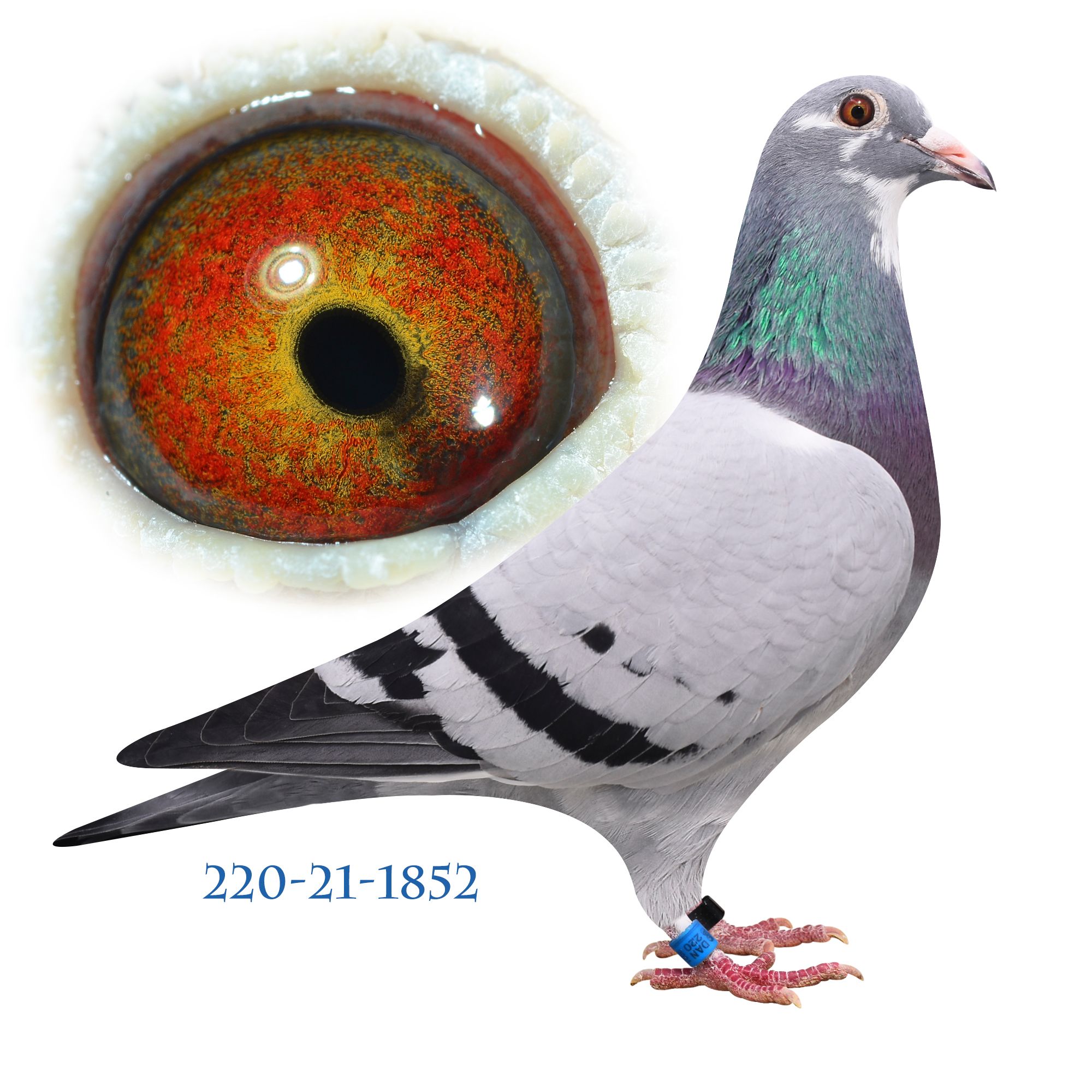 CATWOMAN II:
She is 1. Region from Altona.
MISS HOLLAND is again mother – and MILOS is again on the pedigree! 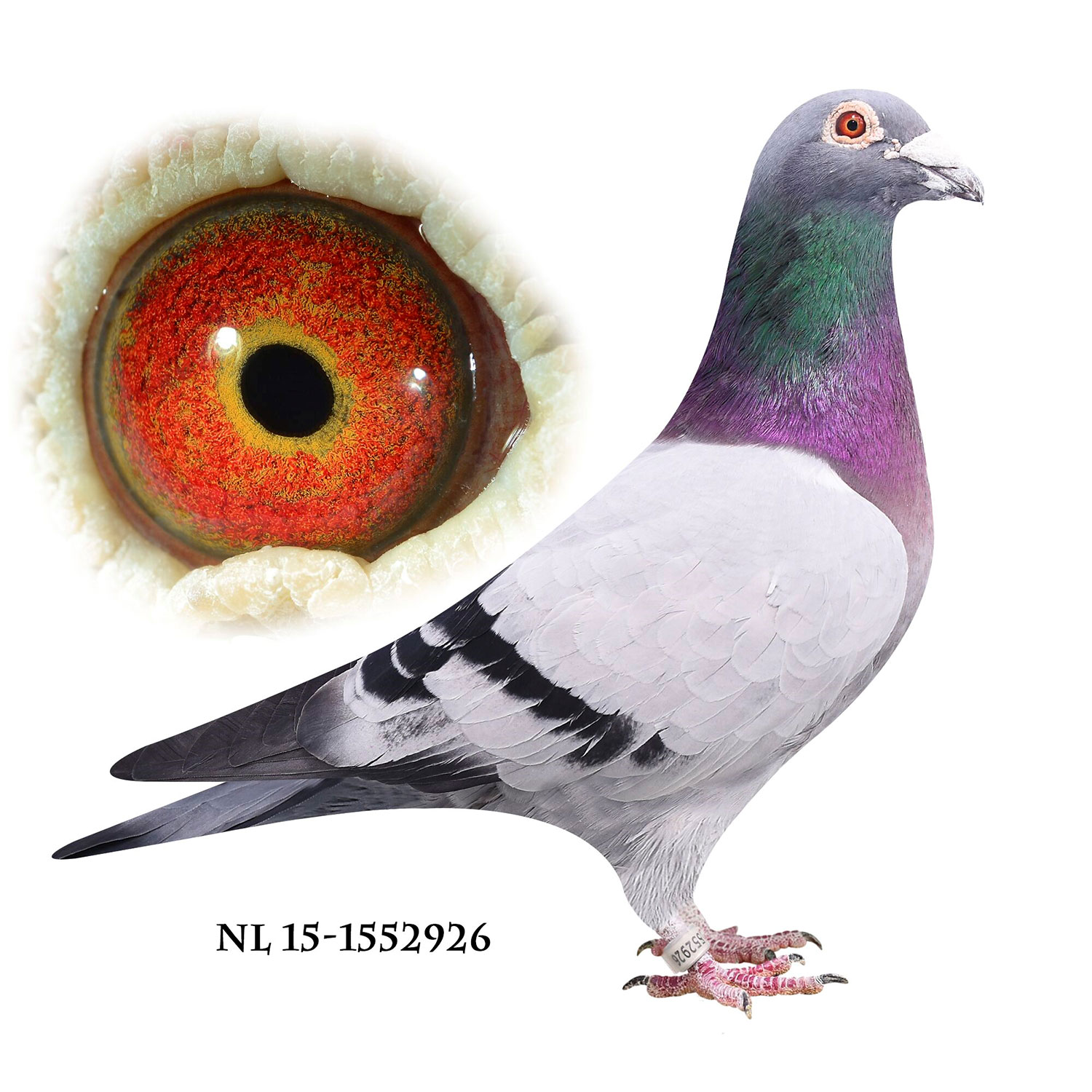 SON OF BARRY:
Kind of the same lines as SON OF BATMAN, just a step closer to BARRY!
So he is halfbrother to BALLOTELLI 1. International Agen
And BATMAN 10. National Marseille. 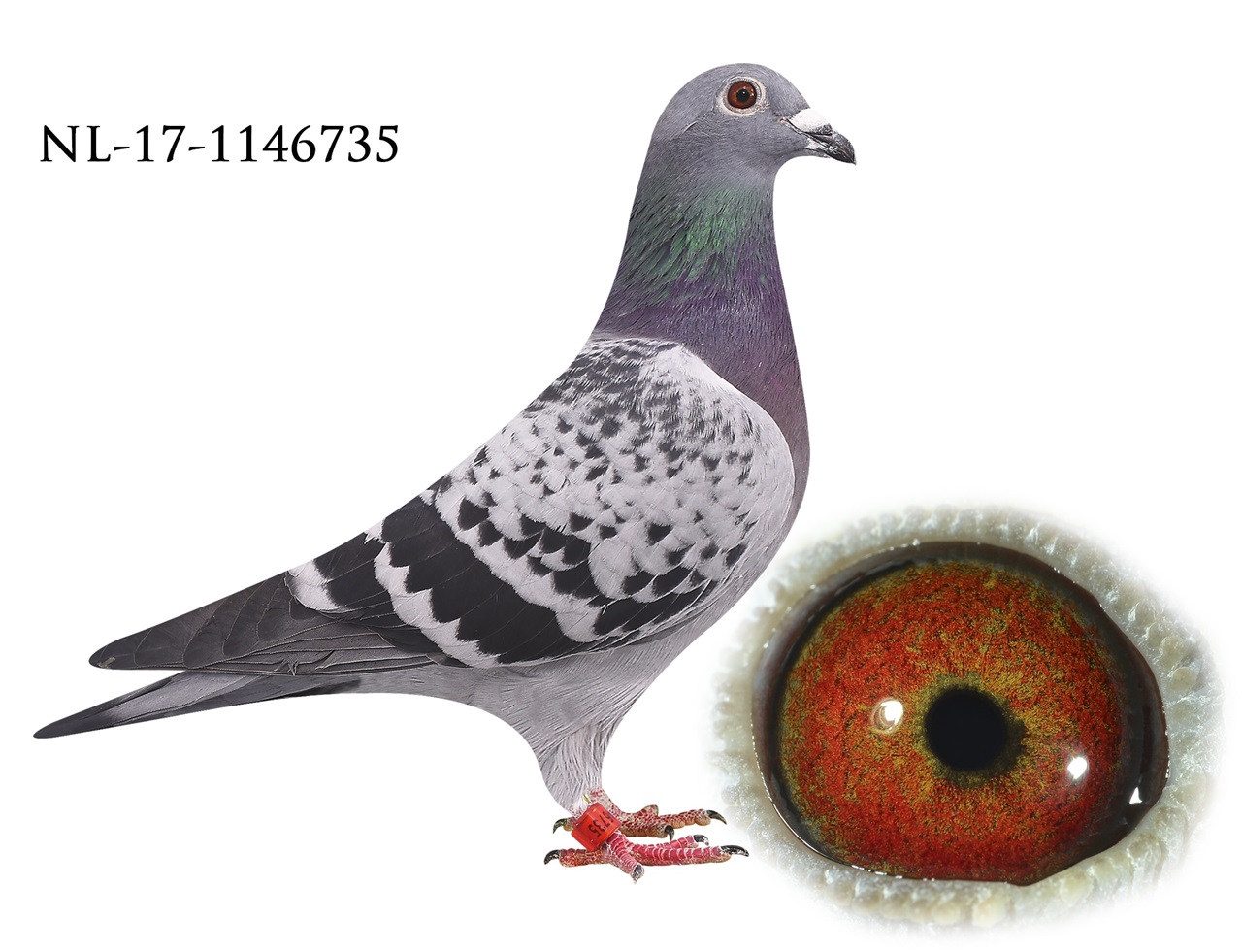 DAUGHTER OF MILOS:
Direct daughter of MILOS!
She is mother to a 2 times winner in the Ostseerennen trainings plus
PATRUSKA: 8. Acepigeon Section 54 as yearling raced by L&M Sorensen.

MILOS is fantastic pigeon for Verweij-De Haan – coming from a fullbrother to TOON and KOPIE TOON – all from Van De Beek.
After a super career as racer, MILOS became a very important breeder – father, grandfather and great grandfather to a countless number of toppigeons – one of the most important longdistance breeders in Holland the last decade. 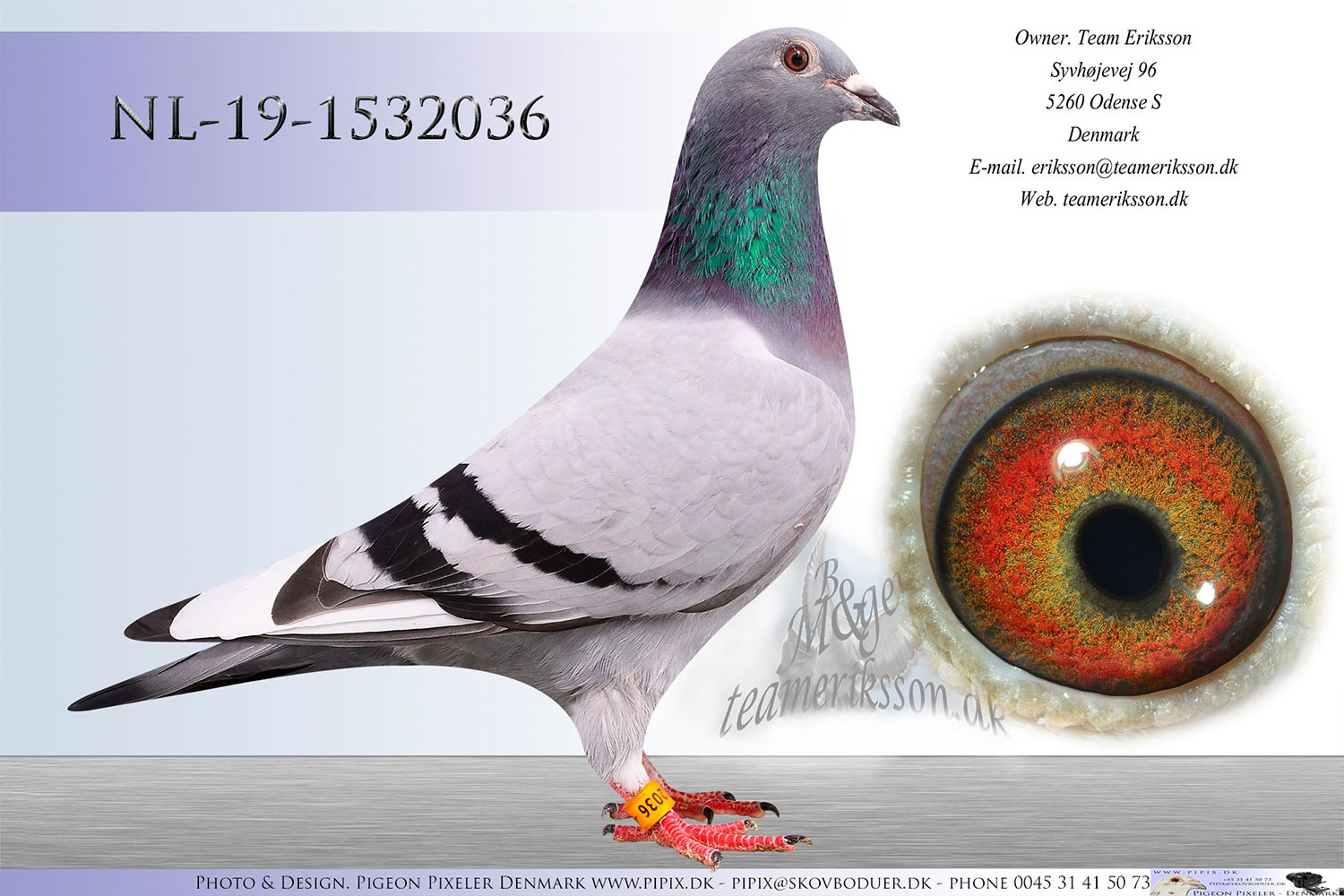 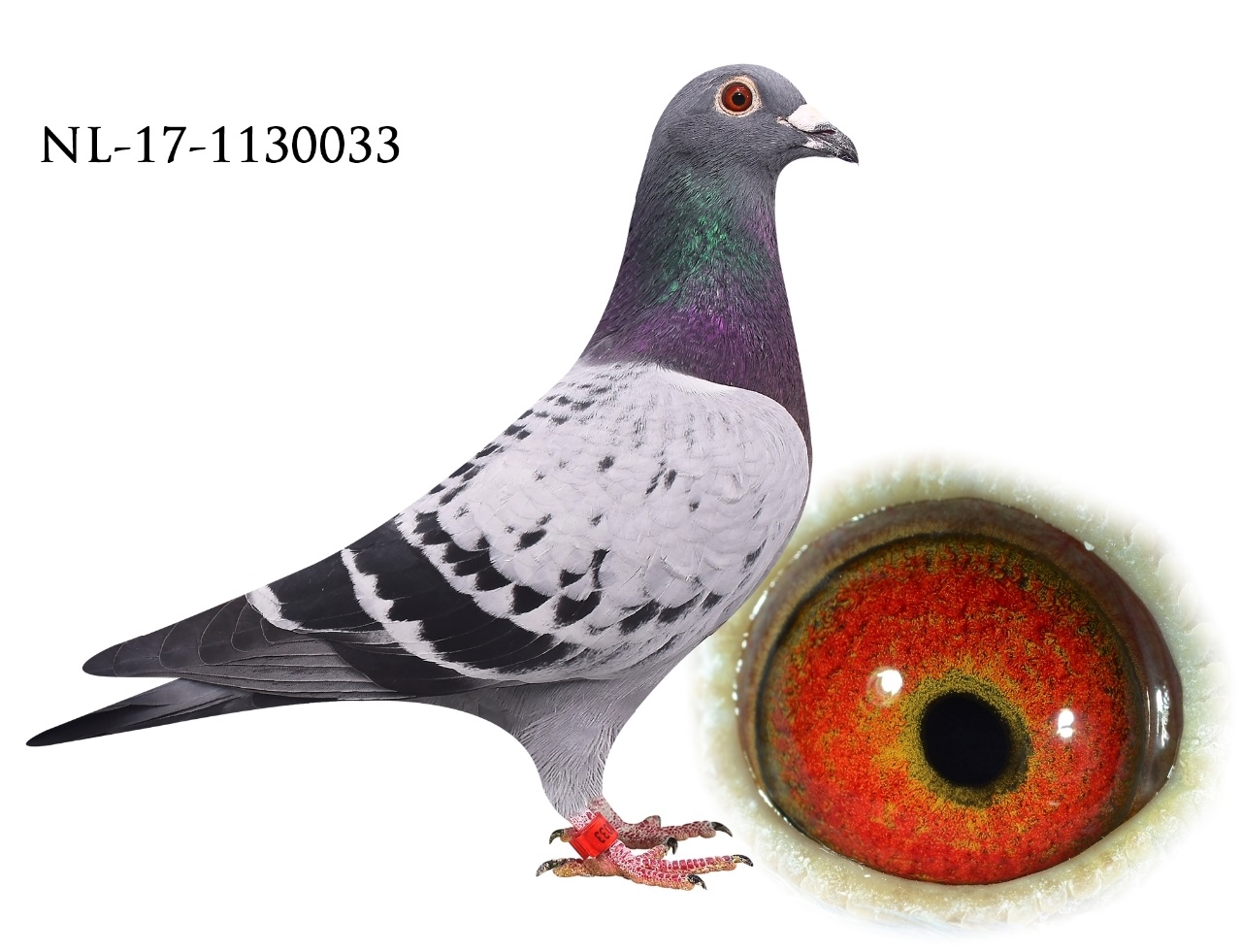 SON OF ROBBEN:
Direct son of a really top pigeon ROBBEN, who excelled from Pau and was Best International Ace pigeon from Pau 2016-2017
He was 9. and 19. National Pau.
SON OF ROBBEN is father to 1. Acepigeon youngsters in section 53.

SON OF RED MESSI:
Son of RED MESSI – Barcelona racer for several years – the mother is IZZY, who also raced Barcelons as was the 2nd on the loft this year and 77. National.

SON OF JONES:
Direct son of JONES – not so wellknown, but a very important breeder –  in example father to RED ROSS.
SON OF JONES is father to 8. Acepigeon Section 54 as yearling raced by L&M Sorensen. 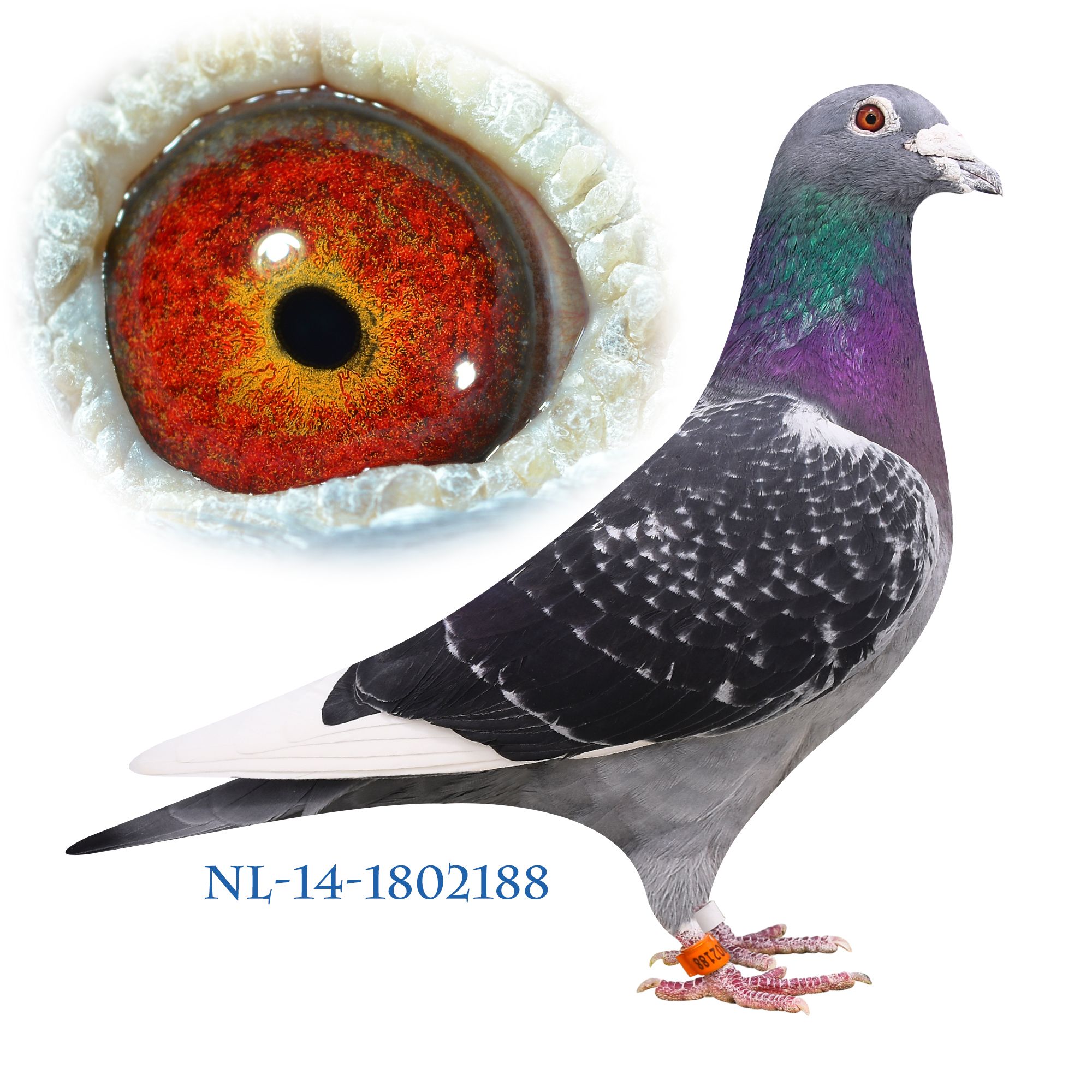 TEAM E’S KOPIE:
A new star they got recently – direct son of KOPIE TOON – fullbrother to TOON and to the father of MILOS.

In addition they also have 2 pigeons with OLYMPIC MISS GIJSJE on the pedigree.
Super origins in Holland at the moment – like mother to MG430 – super breeder for Jelle Jellema and father to 1. National Barcelona 2020.

MG 386: is from a daughter to OLYMPIC MISS GIJSJE.

TEAM E’S MG: Inbred on both fathers and mothers side – so double grandson of OLYMPIC MISS GIJSJE and SNELLE JELLE. 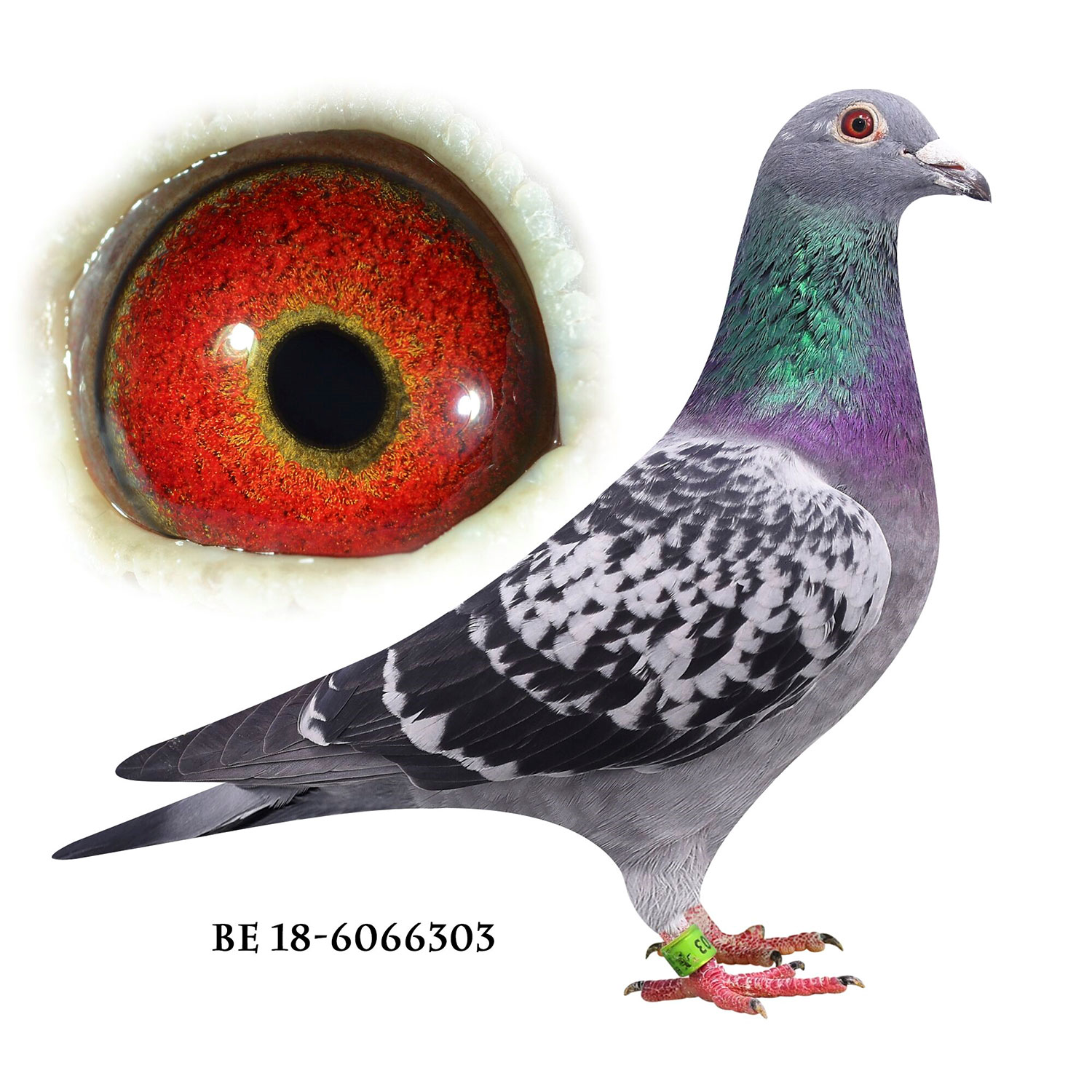 PO´S BARCEGIRL:
Direct from PRINS BARCELONA 1 National Barcelona and 4. International against 17.729 p.
Also on the mother side there are several national winners.
She is mother to:
CATWOMAN I: 1. Region Antwerp as yearling!
LEMME: 1. Region Münster for L&M Sorensen in Section 54 – and 2. Acepigeon Longdistance as yearling.

It seems like these top families really are the right lines for Team Eriksson-PO – and also for several other fanciers in Denmark. Tough pigeons that can conquer the strong winds in Scandinavia.

Team Eriksson-PO are optimistic prior to the new season 2022 – they will have full focus on the marathon and the 6 longdistance races on the program. 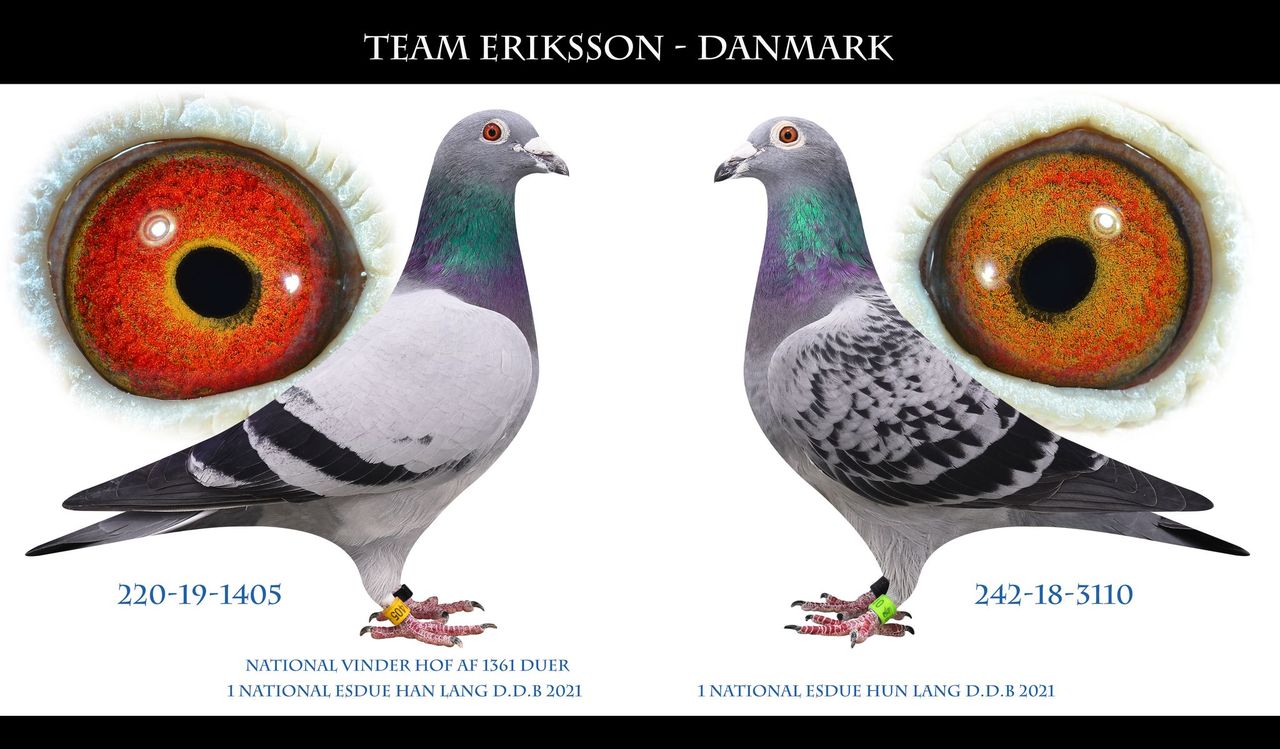 Etc. etc. – of course also a lot of championships in the section and club – you can read more about these results and the team here: www.teameriksson-po-pigeon.dk

We send our congratulations to the team and hope the best for their season 2022!