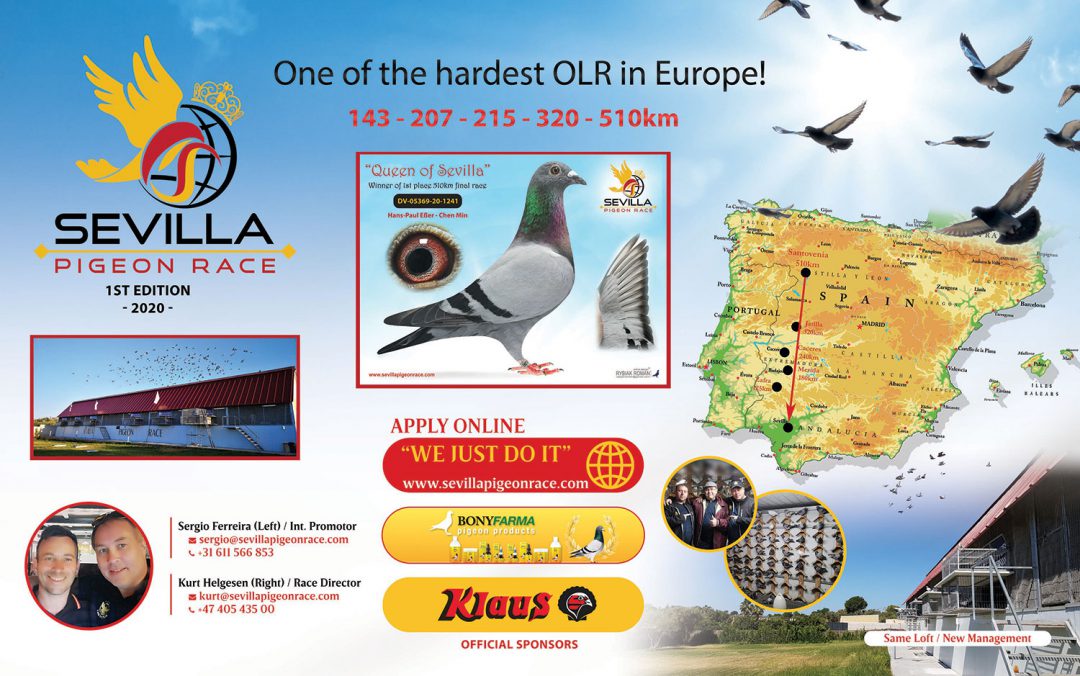 Sevilla Pigeon Race got new ownership from 1. January this year. In short time a new organization was set up.

Experienced OLR player under the name “Arctic Loft Norway” and a real OLR enthusiast and responsible for most of the transport of pigeons from Norway to OLR around.

Sergio Ferreira from Portugal, but living in Netherland: International Promotor

Experienced OLR player and has worked as an International promotor for many OLR and very experienced in transporting pigeons to OLR world wide.

Long-distance champion of Andalucia region together with his brothers. Racing pigeons have been his life and he is a specialist in pigeons health and an expert in building pigeons up to long distance races in the conditions that is in the Sevilla region. 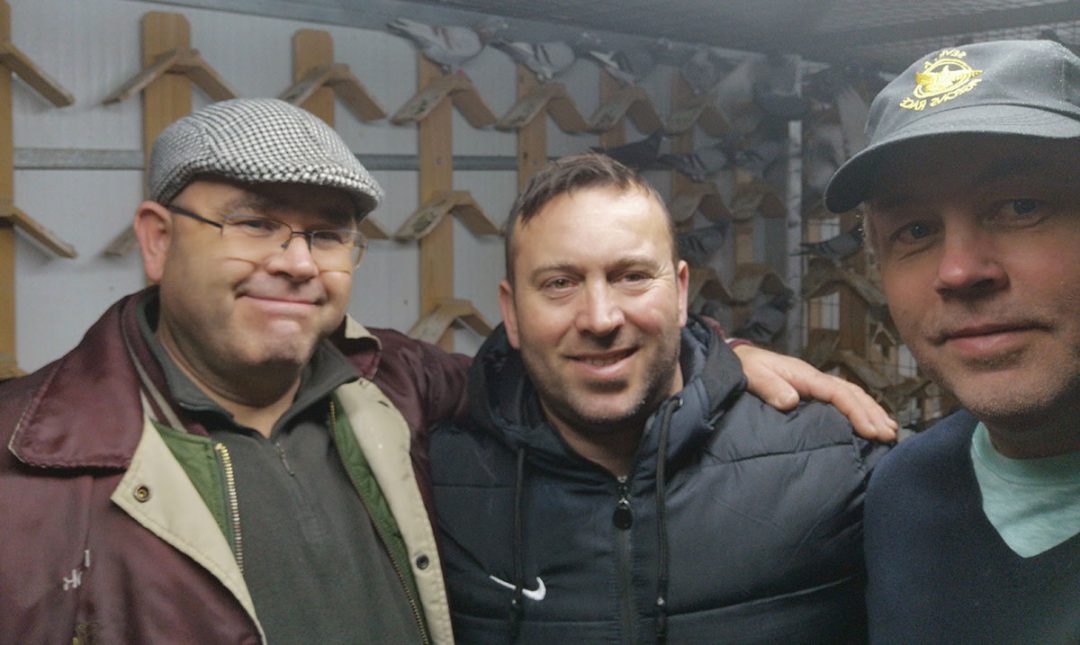 The loft is huge and has a capacity of 3000 pigeons. The pigeons are on 2nd level and there are metallic grills on the floor and perches on the walls.
It is natural ventilated and you can not feel any smell of pigeons in the loft.
We have done a few improvement installing wind-breakers in front and a few more thing will be done to optimize the lofts ventilation before next season. The loft is one of best OLR loft in Europe.

Transparency:
For our race the most important is to be as transparent as possible. What you see is how it is, no bullshit!
Communication has been through Facebook and WhatsApp groups and here the participants can see our daily work at the loft.
Next year we will improve that part even more.

We hired a 3rd party to do all basketing and transport of pigeons. This was a Pigeon Club Italisence located in Sevilla. We had also a representative from the local federation of Leon in the north to confirm our release in the final race. We are proud of being one of the most transparent races in Europe this year and we will improve more next year on this part.

The Race:
Racing pigeons in Sevilla is hard. It’s for the best pigeons. It is very hot in the summer and in the autumn, it can also be high temperatures.
The landscape plus side- and headwinds make it harder than i.e. the Algarve races with a lot of tailwinds.

We had a few losses on all trainings, which is normal, but all in all we only had one bad race and that was the 2nd hotspot from Miajadas 207 km. This was a disaster race and we should avoid releasing the pigeons that day. We were not informed that there were a lot of fires in the south of Spain and on the Portuguese side in addition heavy solar storm activities that day. The race was one of the really bad ones and from 1.229 pigeons we lost something like 450 pigeons.

The semi-final was a fair race, but pretty hard with a winner speed of 1.105 mpm.  The pigeons were in very good shape and 85% of them returned.

The final race, 510 km from Santovenia was postponed almost a week during the weather situation. We knew that 510 km from the north in Spain would be a tough challenge for the youngsters and with side-wind from the west and north-west we decided to wait for better conditions. This year there was no final race party due to the Covid19 situation so we had the possibility to optimize the release of the pigeons.

29th of September at 8:30 we released the pigeons in the north of Spain and at 17:05 one single pigeon from Germany clocked in as the winner of Sevilla Pigeon Race 2020. This pigeon was a venture pigeon bred by famous Hans-Paul Eßer and the pigeon was activated by a Chinese with name Chen Min.

With 8 hours and 35 min flying time the speed was 989 m/m so it was a hard but a fair final race where the best pigeons came first.

Below you can see the winners: 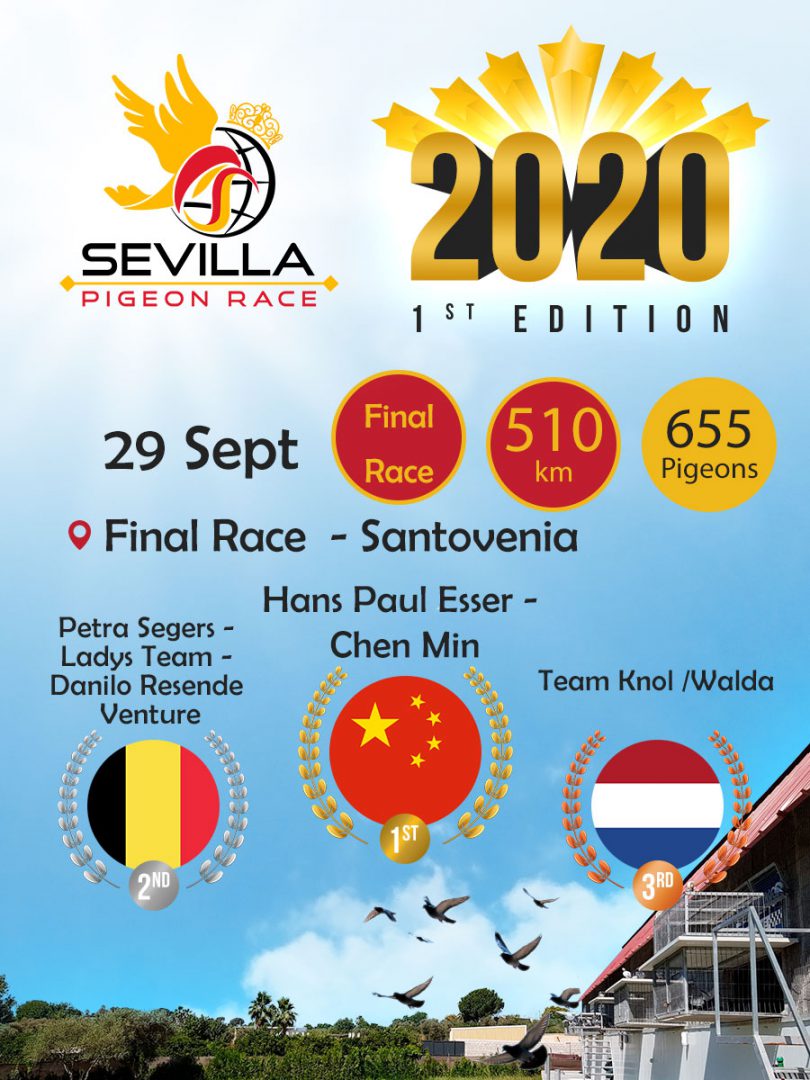 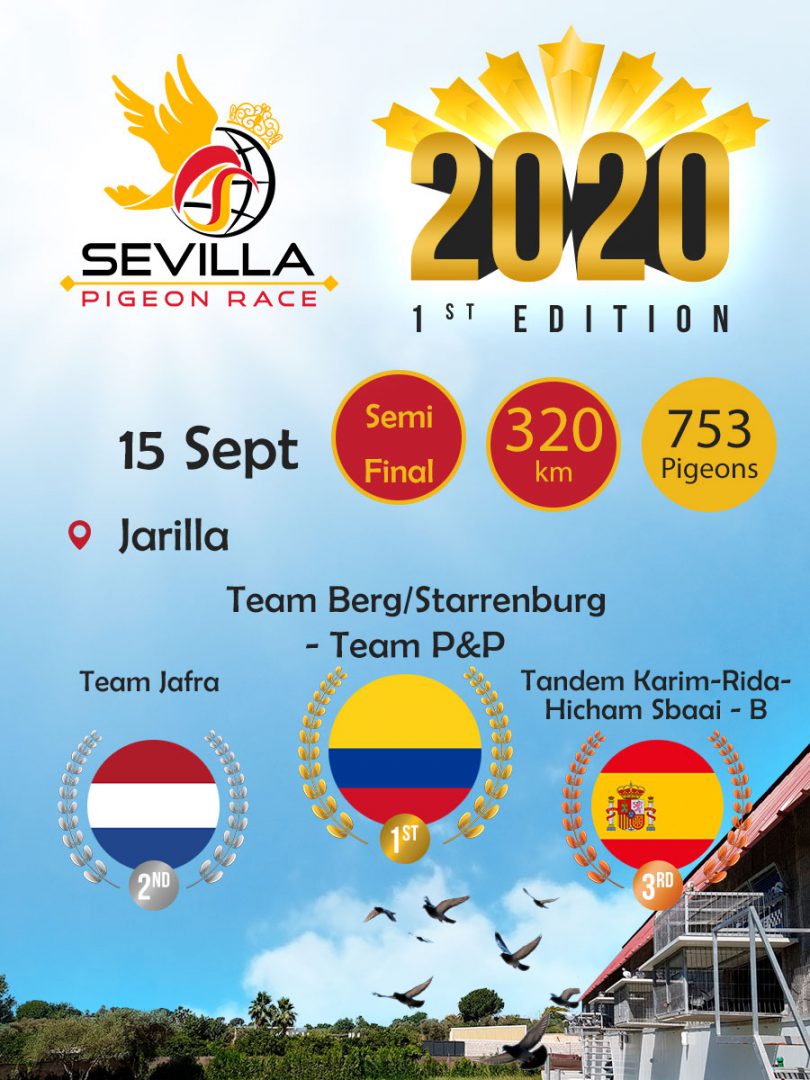 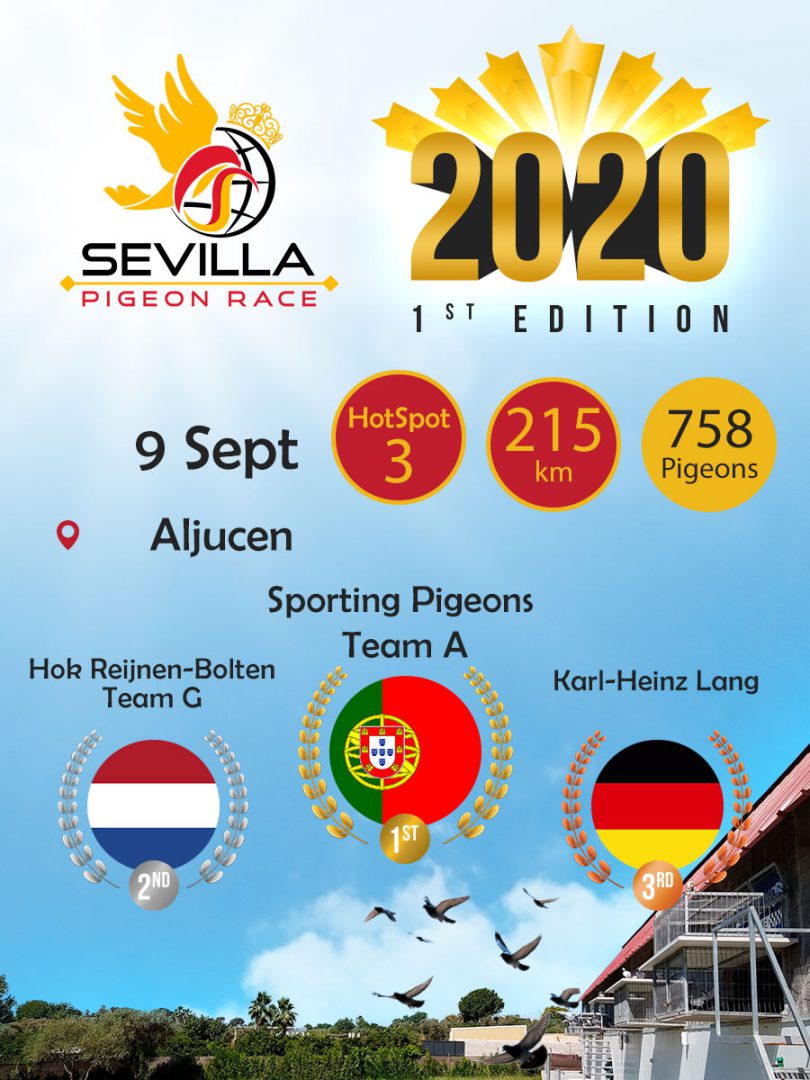 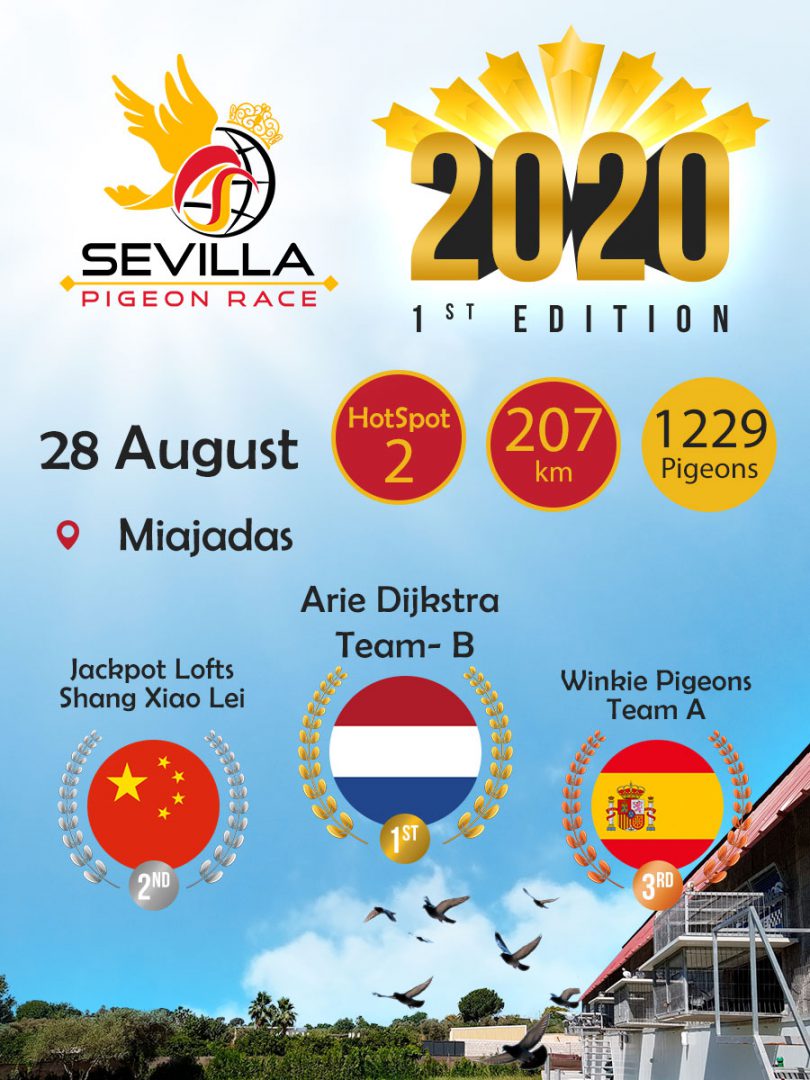 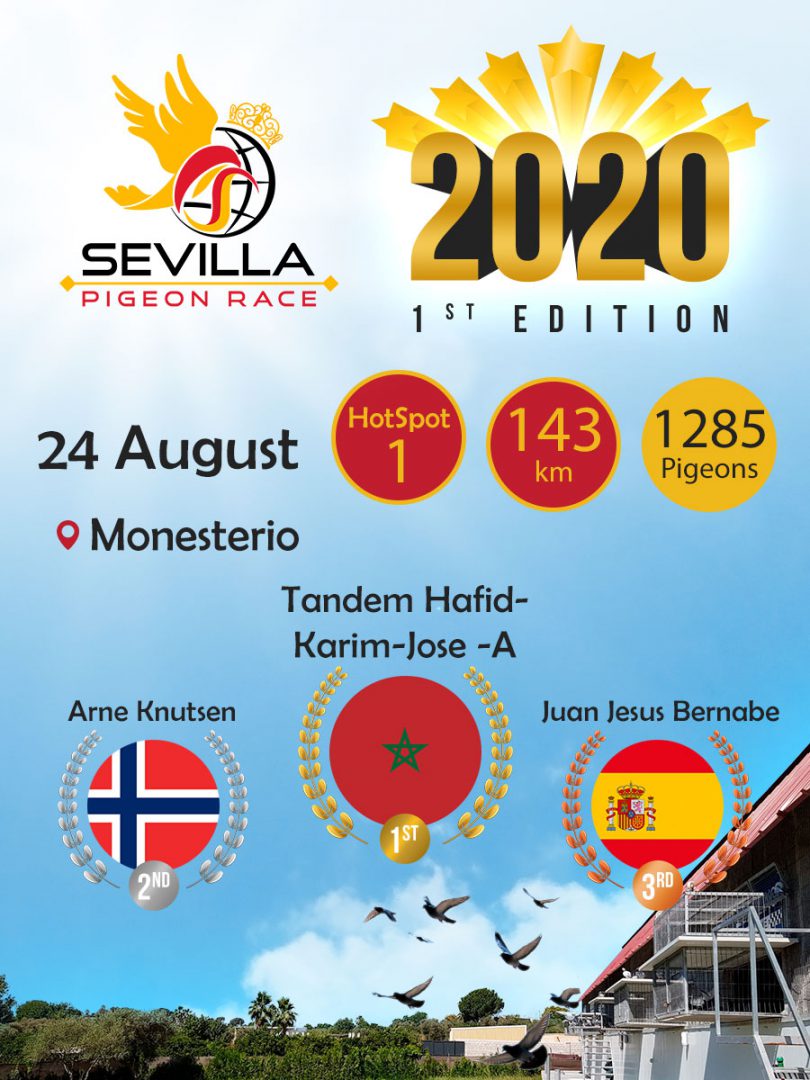 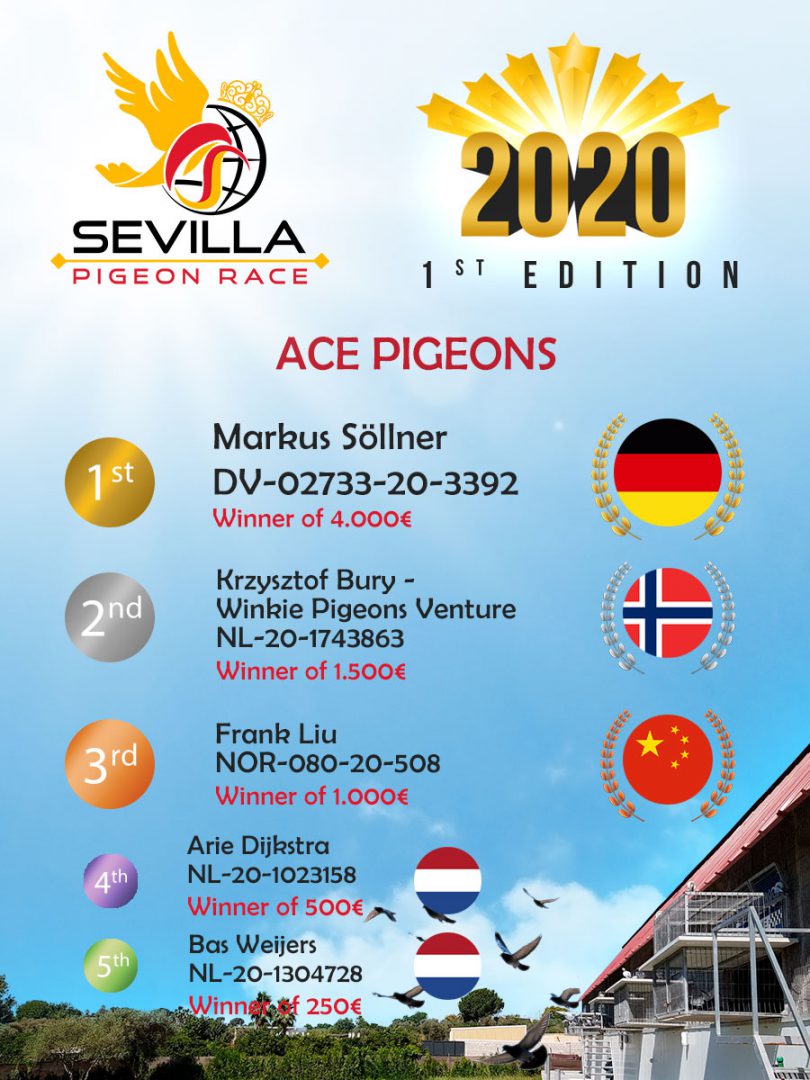 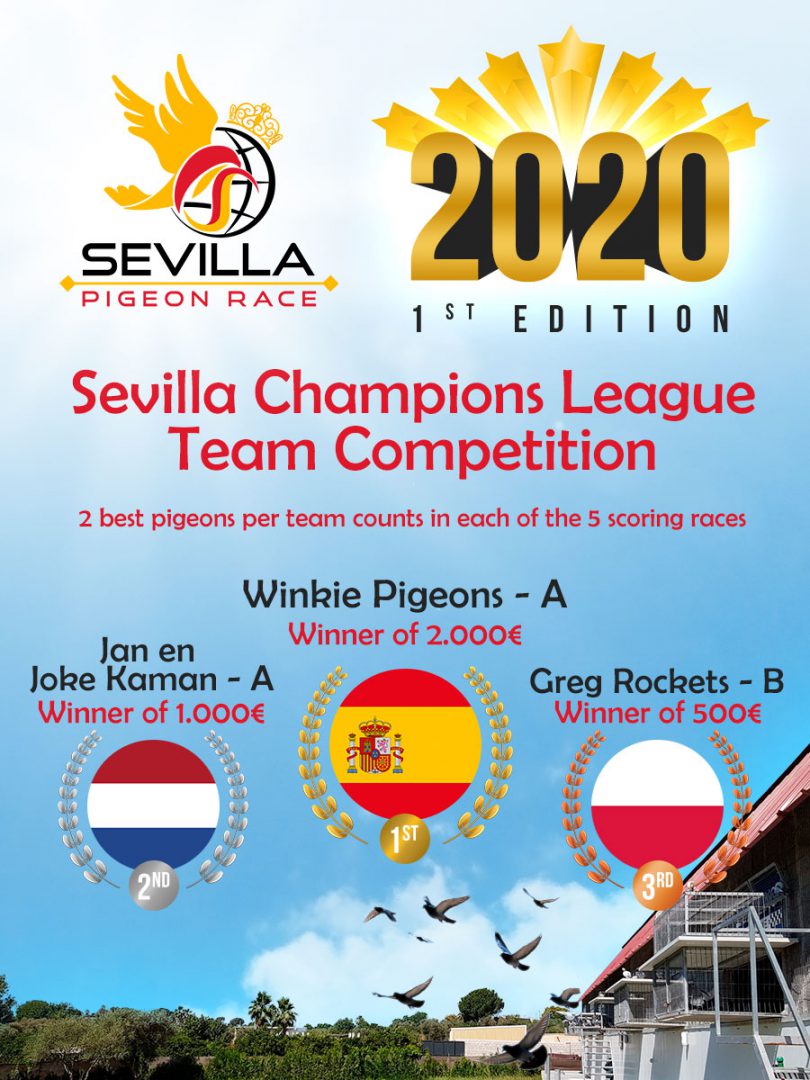 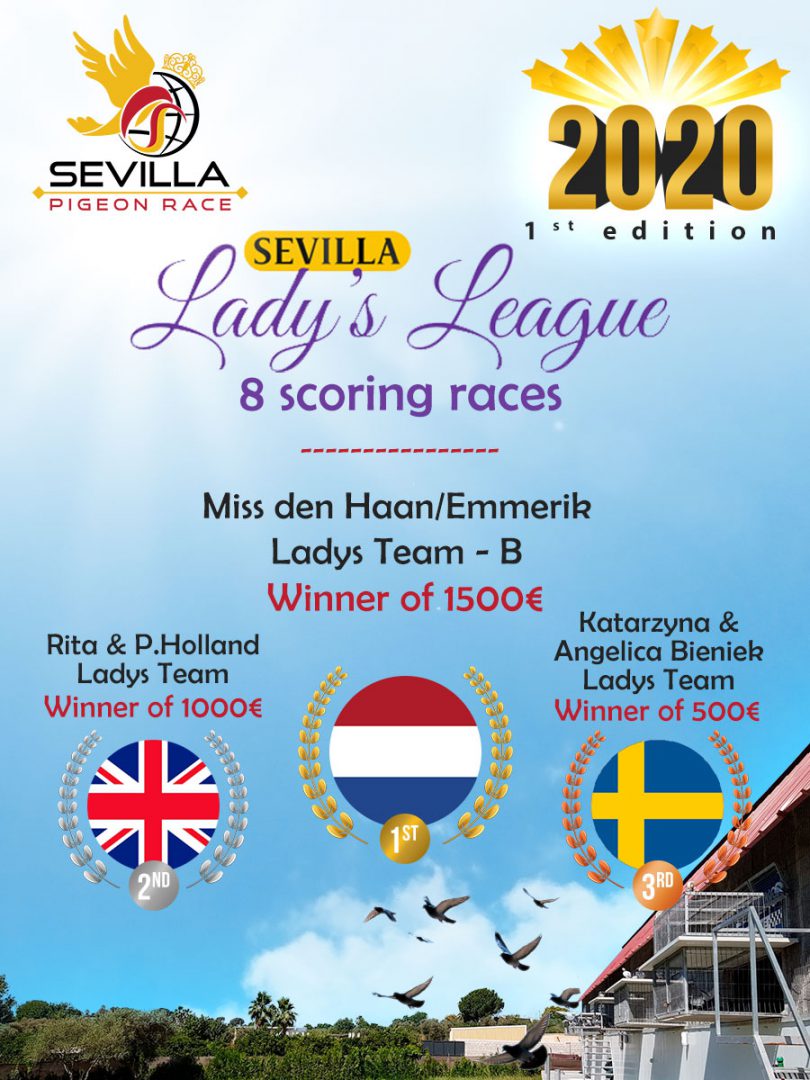 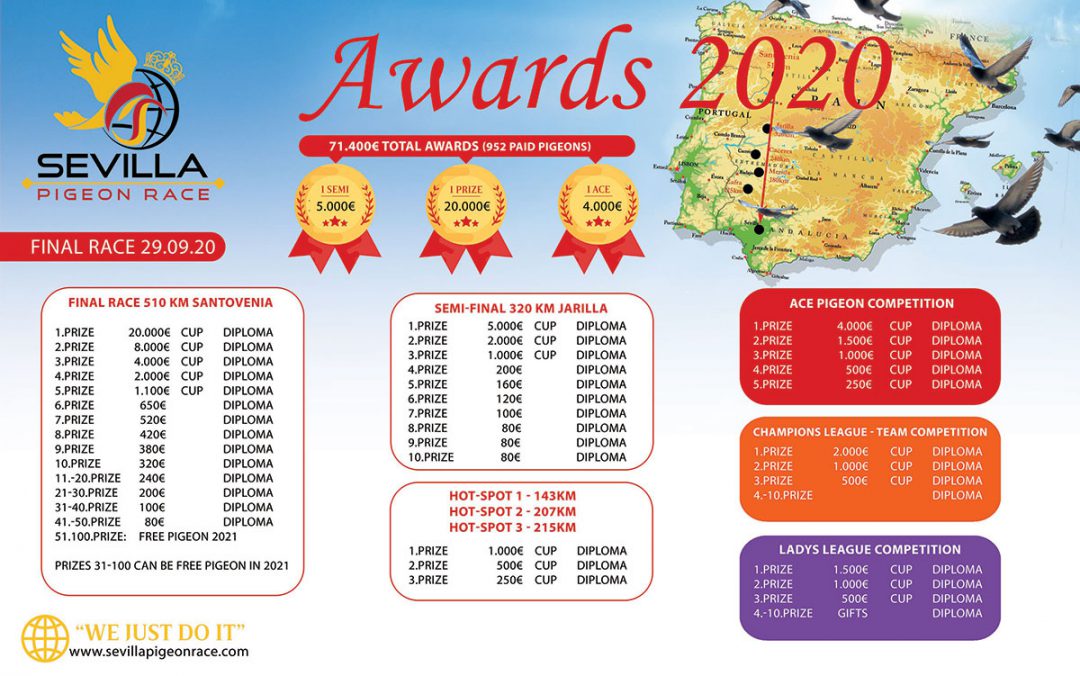